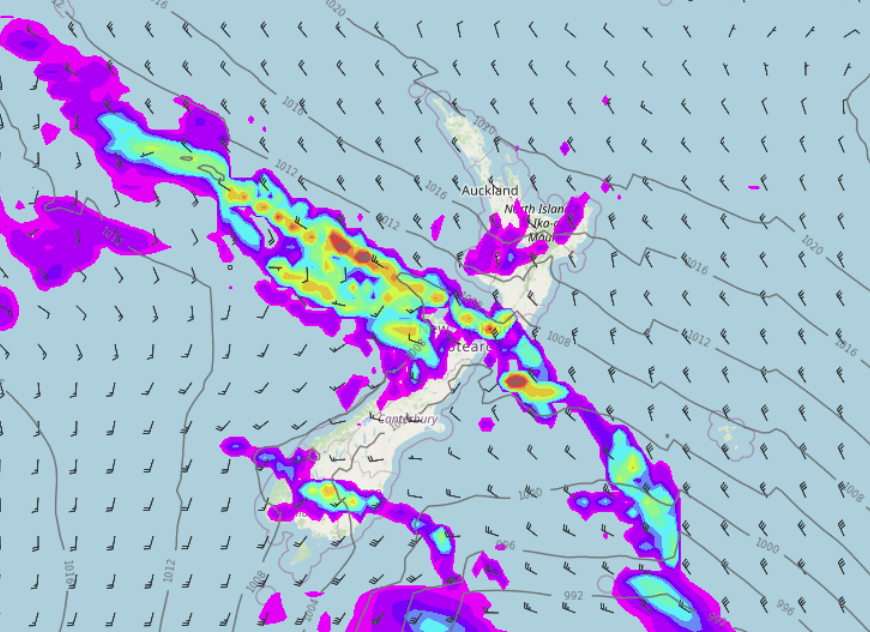 A cold front pushes over the South Island this morning then onto the lower North Island late afternoon, some heavy rain in the west as this front moves through and strong northwesterly winds ahead of it.

Cloudy areas in the west with a few showers, Northland and Auckland are dry though with some sun. Rain moves into the southwestern corner (Taranaki through to Wellington) late afternoon with some rain getting into Wairarapa in the evening. Northwesterlies, gale to severe gale through Cook Strait then easing later in the day.

Heavy rain for the West Coast with thunderstorms eases to showers during the morning starting in the south first thing as northwesterlies change southwest, any remaining showers clear up in the evening. A spit possible about the far south with some sun, in the afternoon showers becoming widespread and heavy with some hail as winds change southwest, some snow lowering to 300m in the evening also.

Morning spits of rain for coastal Canterbury, heavy rain inland with thunder possible, northwesterly winds (gales in the north) then winds change to the south in the afternoon with some sun breaking through and showers near the coast, perhaps an isolated heavy fall on Banks Peninsula with some thunder and hail. Cloud thickens up in the evening for all of Canterbury with a few showers becoming a little more widespread (snow flurries to 400m overnight) although South Canterbury may stay dry.

Rain develops about Nelson in the morning then spreading into Marlborough, heavy falls possible for Nelson especially in the northwest then easing and clearing up late afternoon as strong northwesterlies (gales about the Sounds and Farewell Spit) change southwest. Showers for eastern coastal Marlborough may continue overnight though.