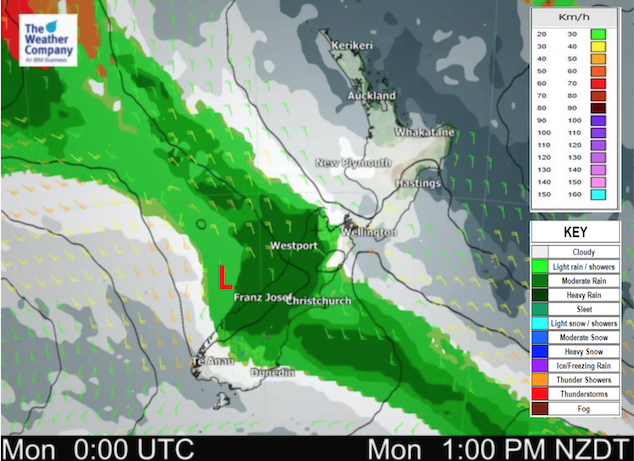 A cold front pushes northwards over the South Island today bringing some wet weather, heavy in the west. Mainly dry for the North Island with showers then rain later in the day moving into Wellington.

Any morning low cloud or fog breaks away for the upper North Island then mostly sunny, some cloud possible during the afternoon. Light winds then afternoon sea breezes. The lower North Island has northwesterly winds with high cloud, afternoon northeast breezes for coastal Hawkes Bay / Gisborne. Later in the evening showers then rain moves into Wellington / Kapiti.

Heavy rain for the West Coast of the South Island, easing and clearing around midday about Fiordland. Heavy rain eases further north from afternoon but will hang about Buller through the night. Thickening cloud about Nelson with some rain from afternoon, spreading into Marlborough in the evening.

Patchy rain for Canterbury south of Banks Peninsula, spreading further northwards from afternoon with cool southerlies. Rain may become fairly consistent about the North Canterbury high country from evening, only spits or drizzle patches further south. Rain about Southland and Otago, clearing Southland early afternoon then Otago by evening, winds from the south.

Afternoon temperatures in the late teens or early twenties for most of the North Island, cooler highs will be more likely about coastal areas and warmer highs inland. Parts of the east coast make it into the mid twenties during the afternoon.

Highs between 10 and 15 degrees for most of the South Island. The coolest highs will likely be about Southland and Otago. The exception is northern North Canterbury, Marlborough and Nelson where highs are in the late teens or early twenties.