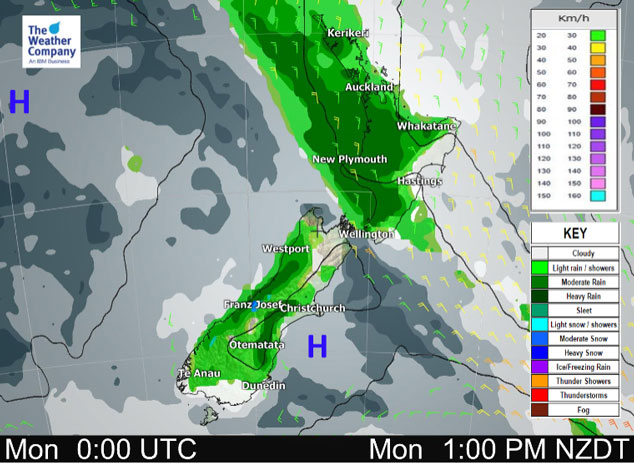 A slow moving frontal system inches towards the western North Island today with a pre frontal northerly airflow dragging in some patchy rain for the west meanwhile a southerly change pushes up the eastern side of the South Island with showers.

Mostly cloudy for the upper / western North Island, the odd shower turns to some rain in the afternoon, becoming heavy about Taranaki, the Central North Island and Manawatu overnight. Plenty of high cloud in the east (Gisborne to Wairarapa), spits of rain spread into Wairarapa from mid afternoon. North to northeasterly winds.

Showers for the West Coast, clearing South Westland in the afternoon then further north in the evening / overnight. Early showers clear Nelson / Marlborough then look for the risk of a shower again late afternoon / evening. Dry with some sun for Canterbury to start then showers push into South Canterbury during the morning, North Canterbury in the afternoon with a southerly change. Showers may be heavy with thunder/ hail (mainly for inland areas) before easing / clearing away overnight.

Showers push through Southland and Otago this morning then easing from afternoon and mostly clearing by evening. Showers may become heavy with small hail about northern Otago for a time.