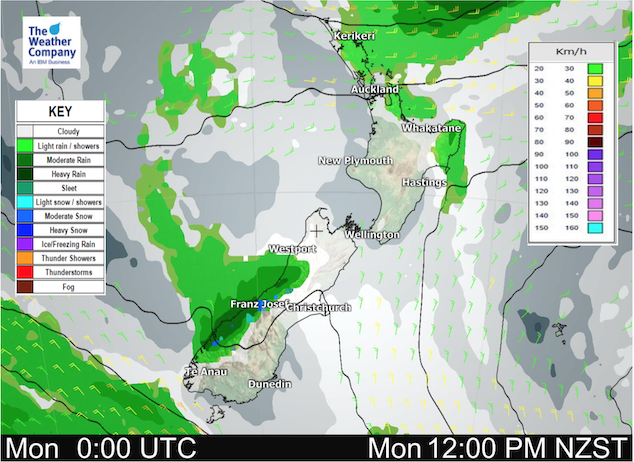 A ridge of high pressure lies over New Zealand today, directing an easterly airflow over the North Island meanwhile the flow tilts a little more north to northwest for the South Island.

Expect mostly cloudy skies and the odd shower at times for Northland (especially in the east), Auckland (mainly in the north), Coromandel, western Bay Of Plenty and East Cape through to northern Hawkes Bay. Elsewhere expect a mix of sun and cloud. Winds generally from the east or northeast, light variable winds for the western North Island (i.e. Taranaki).

Mostly cloudy skies for the West Coast, some rain south of about Westport. High cloud for Nelson / Marlborough, light winds. Plenty of high cloud for Canterbury, some mid level cloud Banks Peninsula southwards this morning gradually breaks away. Morning mid to low level cloud for Southland and Otago breaks away but expect high cloud for the rest of the day. Winds are mostly from the north or northeast.

Today’s expected highs in the map below.