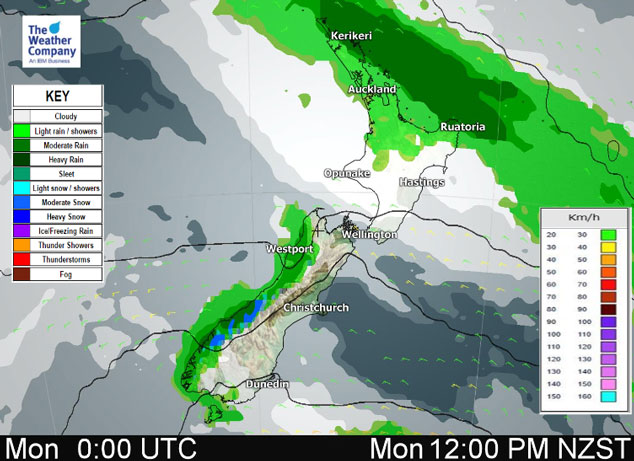 A westerly airflow lies over New Zealand today, spinning out of a weak anticyclone in the Tasman Sea. Meanwhile an occluded front lies just offshore to the northeast of the North Island.

Expect some rain or showers north of about Auckland then breaking with some sun in the afternoon, there is the chance of a shower lingering till evening. A shower or two for the lower western North Island (Taranaki to Kapiti) then breaking to afternoon sunny areas. Some parts of the Waikato, Central North Island and inland Bay Of Plenty may see a few showers linger through till evening. Mainly dry in the east with some high cloud however there may be a few spots of morning rain about northern Hawkes Bay / Gisborne.

The West Coast has a mostly cloudy and showery day, same goes for Southland (especially coastal areas). Otago is mainly dry but expect cloudy areas. Canterbury through to Nelson in the east is mostly sunny although there may be some high cloud.

A high of 20 degrees for Auckland, 19 to 20 for Hawkes Bay / Gisborne, 17 in Wellington. Fairly average temperatures for Southland, Otago and right up the West Coast with 14’s and 15’s . Canterbury, Nelson and Marlborough stand out however with 18 to 19 degree temperatures expected.