Moderate risk of thunderstorms for Top Half 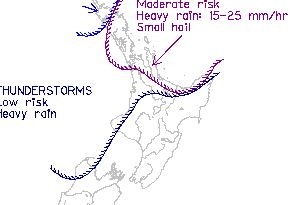 A band of heavy showers, known as a trough, is currently moving down Northland and could spark a few isolated thunderstorms today in the Top Half predicts WeatherWatch.co.nz.

The free and live Lightning Tracker at WeatherWatch.co.nz has detected around 1000 strikes so far today mostly to the west of Northland, where the trough currently lies.

Within the next few hours it will move into Auckland and later today Coromandel Peninsula, northern and eastern Waikato, Hauraki Plains and coastal Bay of Plenty and WeatherWatch.co.nz says there is a moderate chance of isolated thunderstorms across these regions, compared with a low chance yesterday.

WeatherWatch.co.nz says these heavy showers could cause further pockets of slips and flooding.

And the Metservice also predicts a similar path, but extends a lower risk prediction of thunderstorms spreading into Taranaki and even Nelson.  Check out their map below. 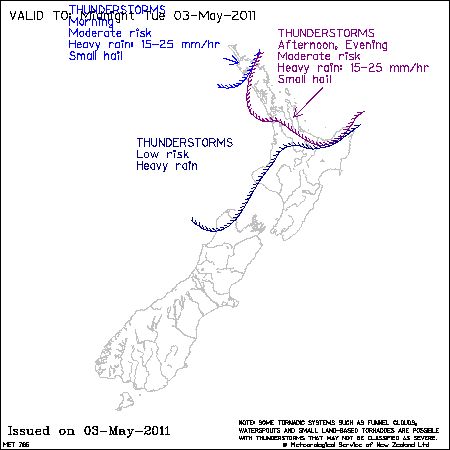 My daughter has just called to tell me that a tornado has taken panels off the roof of PaknSave in Albany! She was across the road, and sadly did not get photos.

Roof lying over road according to people at the scene.

Reports of Tornado in Albany. Torn roof off Pakn Save.

Absolutely awful this morning here in Kaitaia – now beautiful and sunny.
Crowded House should write a song about this.

Just had a good cloudburst here in Kerikeri. 15ml in about 10mins with a few rolls of thunder. All hot and sunny now.