Mild week on the way – especially out east 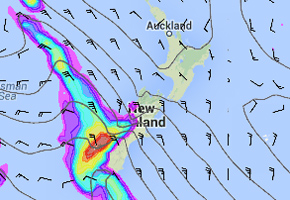 This coming week will progressively get warmer as a northwesterly airflow begins to build over the South Island then North Island from mid week onwards. Of course with northwesterlies this generally means the warmest weather occurs in the east and this time is no exception.

First of all we have to get a low out of the way today. For the upper South Island and most of the North Island rain or showers can be expected with a developing southwesterly airflow for most. Thunderstorms may even be on the cards for Taranaki this morning then the Waikato, Bay Of Plenty and possibly Auckland in the afternoon. The lower South Island will be dry with sunny weather developing in the morning, expect some high cloud later in the day however.

Tomorrow our low moves away to the east of the North Island, any remaining showers about the east coast of the North Island clear then a few sunny areas develop. The rest of the North Island can expect sunny spells, winds will be from the southwest although Wellington will get a northerly. In the South Island a northwesterly airflow develops with some high cloud out east and warm temperatures up into the high teens or low 20’s mark, western areas see cloudy skies and drizzle or patchy rain about Fiordland.

A front begins to work it’s way onto the South Island on Wednesday, heavy rain can be expected in the west while high cloud and warm temperatures develop again out east. As the front moves north there may be a brief spell or rain pass over to the east coast and northwesterly winds just ahead of the front will be strong in inland parts of Canterbury.

For the North Island expect a generally good day with light winds, northwesterlies develop in the afternoon. Cloud and some rain approaches the southwestern corner of the island later in the evening or overnight.

Northwesterlies continue on Thursday, warm weather looks likely again for the east of both islands with some high cloud. The front that moved over the South Island on Wednesday weakens a fair amount and brings showers to some western parts of the North Island, mainly about Taranaki southwards. A new front lines up in the Tasman Sea and moves onto the South Island overnight bringing heavy rain in the west.

And finally we come to Friday, the front that worked it’s way onto the South Island overnight Thursday moves off to the north during the day so expect a few sunny areas to develop behind it. It won’t be as warm through with the front bringing in cooler air behind it. The North Island get’s it’s turn with rain and showers gradually spreading into western regions, the east may escape with high cloud.

tomorrow. showers can be expected with a developing southwesterly airflow for most bla blah blah
Tues. winds will be from the southwest although blah blah blah
fri. The North Island get’s it’s turn with rain and showers gradually spreading into western regions, blah again

Believe in "The Power of Pine Needles"