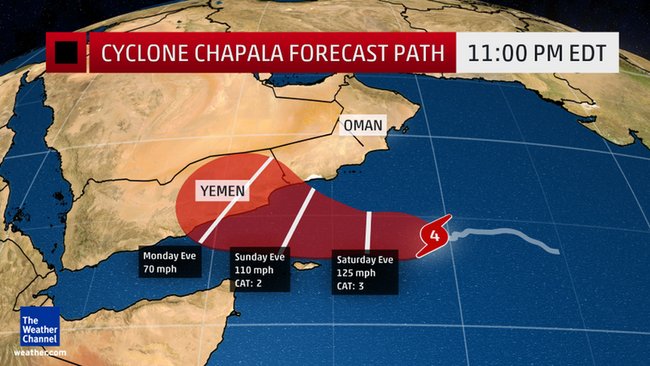 Cyclone Chapala became the strongest tropical system so far south in the Arabian Sea on record and may make an unprecedented landfall at hurricane strength along the coast of Yemen or southwest Oman in the days ahead.

Chapala rapidly intensified and had estimated winds as strong as a high-end Category 4 early Saturday. Some further decrease in intensity are expected over the next day or so as the system gradually weakens.

While direct measurements from reconnaissance aircraft are not available over the Arabian Sea, Chapala’s rate of intensification from a high-end tropical storm to a high-end Category 4 storm in 24 hours ending 2 a.m. EDT Friday morning (Sat NZT) was quite impressive for this part of the world.

Tropical cyclones in the Indian Ocean basin, which includes the Arabian Sea, are simply known in English as “cyclones” or “cyclonic storms” regardless of strength. There are no special terms such as “hurricane” or “typhoon” applied based on reaching a certain intensity, but the India Meteorological Department does apply various adjectives such as “severe” or “very severe” to describe different intensity levels.

Cyclone #Chapala: 80 knots of intensification in the past 24 hours. Impressive for Arabian Sea. (Images: EUMETSAT) pic.twitter.com/7d0DB4y5oI

Warmer-than-average Arabian Sea water along its path had, in part, allowed for Chapala is intensify so rapidly.

Steered by subtropical high pressure, Chapala is expected to track west or west-northwest through the weekend, making landfall along the coast of eastern Yemen or southwest Oman Monday.

The latest potential forecast track of the center of Cyclone Chapala, from the U.S. Joint Typhoon Warning Center. Remember, impacts (rain, waves, wind, coastal flooding) can occur outside the cone.
Tropical cyclones that do near the Arabian Peninsula often ingest dry, desert air and weaken before making landfall, if they do at all.

In this case, we expect Chapala to make landfall as a weaker, possibly much weaker cyclone than its potential maximum intensity over the Arabian Sea. Small tropical cyclones can both intensify rapidly and weaken rapidly.

However, Chapala may still be a formidable cyclone of at least Category 1 intensity at landfall, a very unusual, if not unprecedented occurrence for Yemen or southwest Oman. (More on that below.)

The threat of heavy rainfall should be in play regardless of the intensity.

Chapala has the potential to dump 3-4 times or more the average yearly rain in just a day or two over parts of eastern Yemen and southwest Oman. According to worldclimate.com, the average annual rainfall in Salalah, Oman (estimated population 197,000 as of 2009), is only around 4 inches (10cm).