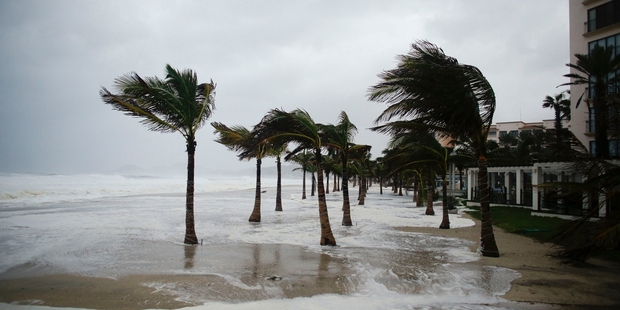 Hurricane Odile has crash-ed into northwestern Mexico’s Los Cabos resorts, taking down trees with powerful winds as thousands of tourists hunkered down in luxury hotels converted into shelters.

The “dangerous” category three storm in the five-level Saffir-Simpson scale packed 205km/h winds when it made landfall near Cabo San Lucas in the late evening, according to the US National Hurricane Centre.

Around 26,000 foreign tourists and another 4000 Mexicans were staying in 18 hotels converted into temporary shelters, officials said.

“It took us by surprise. The sea is rough. I think this is going to get very ugly,” said Steve Clement, a surfer from Hawaii.

Around 7000 residents were evacuated from low-lying areas and took refuge in shelters or with relatives, Felipe Puente told Foro television.

Operations at Los Cabos International Airport were suspended. Authorities cut power in Cabo San Lucas to prevent electrocutions while officials said schools would close on Monday and independence day festivities would be called off.

Hundreds of troops were deployed to help the population.

“The tourists are not panicking,” said Daniel Manzini, assistant manager at the Hyatt Place hotel in San Jose del Cabo, which was nearly full. “The hotel is safe and can be converted into a shelter.”

Gordon Peter, a 65-year-old US tourist, had been in Los Cabos for a week when his flight home was cancelled.

“I’m not afraid but I want to go home,” he said. “I’ll spend the night in the lobby of my hotel. I could not find another hotel room.” The hurricane had grown to category four strength earlier in the day before weakening. It was moving north-northwest at 28km/h.

Calling Odile a “highly dangerous” hurricane, National Water Commission director David Korenfeld said a weather alert was issued for the entire peninsula for at least the next 24 hours.

After landfall, the hurricane was expected to gradually weaken as it moves over or along Baja California’s coast.

A total of 15 to 30cm of rain was predicted in the peninsula and was likely to spark “life-threatening flash floods and mudslides”, forecasters said.

A fast-moving typhoon blew out of the northern Philippines after causing flash floods and landslides. Three people died when big waves and strong winds sank a stalled ferry over the weekend.

The government weather bureau said the eye of Typhoon Kalmaegi was over the South China Sea, about 372km west of northwestern Laoag city, moving northwest towards southern China at 30km/h. It was packing sustained winds of 120km/h and gusts of 150km/h.

Schools in five regions, including metropolitan Manila, were suspended and dozens of flights were cancelled. Hundreds of ship passengers were stranded in ports.

About 7800 residents were moved to evacuation centres at the height of the typhoon.