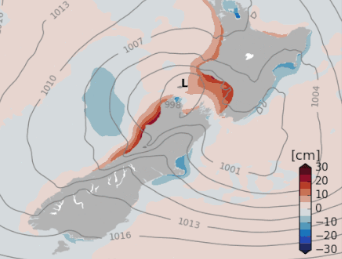 â€œWe were lucky that the system moved through fast and did not coincide with large tides, otherwise the coastal flooding could have been a lot worse.â€

Storm surges occur when the sea rises as a result of wind and atmospheric pressure changes associated with a storm. The surges build up over time and will worsen when a low pressure system lingers.

â€œOur modelling shows that as the storm progressed, it caused storm surges in different parts of the country. Although mostly mild, the storm surges were still high enough to cause coastal flooding in sensitive areas.

STORM SURGES UP TO 35 CM HIGH OCCURRED IN A NUMBER OF COASTAL LOCATIONS AROUND NEW ZEALAND.

â€œWe were very lucky that the storm moved through so fast, and that it coincided with neap tides. Had it happened at spring tides, when the high tide levels are higher, flooding in the area could have been much worse. Our models show that at spring tide, the storm surge would have been high enough to almost match the measured river level after all the rain. In that scenario, the river would not have drained into the ocean as fast, which means the flooding would have been worse and lasted longer.â€

COASTAL FLOODING COULD HAVE BEEN MUCH WORSE HAD THE STORM SURGE COINCIDED WITH SPRING HIGH TIDE AT THE WHANGANUI RIVER MOUTH.

Storm surge forecasts provide valuable information for for low-lying coastal locations, and these solutions are readily available to public authorities.

â€œMetOcean Solutionsâ€™ New Zealand storm surge model has a resolution of 5 km. Itâ€™s the only operational hydrodynamical model for the country and weâ€™ve been running it for more than five years now. During that time we have used it for oil spill and search and rescue modelling, and during the Rena disaster is provided essential guidance for the national response activities. We developed a similar model for the south coast of Australia, which has been operational for more than one year. This model is used by our Alliance partners OMC International in their specialist under keel clearance applications.

â€œWe run these types of models all over the world,â€ says Rafael – even in his home country of Brazil where the complex flows along the continental shelf are important to the offshore oil field operations.