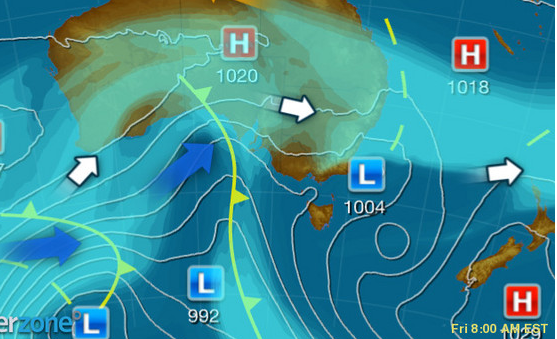 Melbourne will be given a chance to thaw out today following the city’s coldest day in 19 years on Thursday.

Yesterday’s maximum temperature was just 9.0 degrees in Melbourne as the perfect ‘cold day scenario’ affected the city. The morning started out at just 3.1 degrees after clear skies allowed the mercury plummet during Wednesday night. Thick cloud then drifted over the city blanketed Melbourne throughout the day, limiting the amount of heating from the sun.

Yesterday’s maximum temperature was six degrees below the average for August and came in as the city’s coldest day for any month since 1998. The last time a maximum temperature that low occurred during August was in 1970, when the mercury only made it 6.8 degrees.

Daily maximum temperatures in Australia are measured as the highest temperature recorded during a 24 hour period between 9am on two consecutive days. This means the city needed to remain below nine degrees until 9am today for Thursday to go down as its coldest August day in almost 50 years.

The statistic came close to being spoilt this morning as the temperature rose to 8.6 degrees at 8:50am and 8.9 degrees at 9am.

Today is forecast to reach a more pleasant top of 13 degrees in Melbourne. While this is still two below average for this time of year, it’s balmy compared to yesterday.