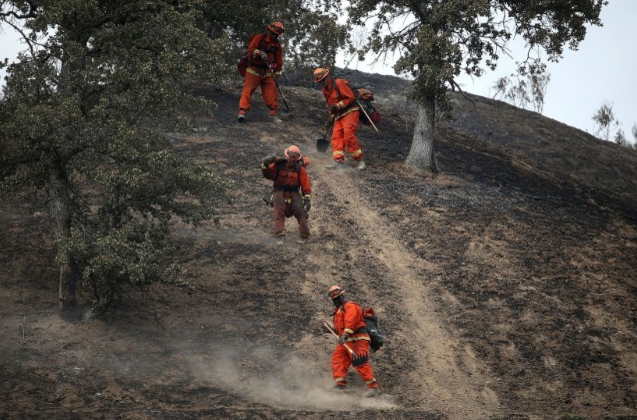 As a third-grader, for instance, the now-34-year-old’s family took him on a road trip across the Rocky Mountains. He had to know: Why did the trees stop growing at a certain elevation? Why were there plants on one side of a mountain and desert on the other?

In fifth grade, he heard a radio broadcast. A weatherman predicted that a drought in Northern California, where he grew up, would last for five more years. How did he know that? What sort of magical person was this who could somehow see into the future?

It’s perfectly fitting, then, that Williams, who now is a mussy-haired, unassuming climatologist at the Tree Ring Lab of Columbia University’s Lamont-Doherty Earth Observatory, would be among a group of pioneering climate change sleuths who are trying to answer a critical and, until recently, unanswerable question: Was that climate change?
Think of it as detective work for the fossil fuel era.
It’s climate forensics.

While the broad trends of climate change, and our role in causing it primarily by burning fossil fuels, have been clear for decades, it was impossible until recently to tie a particular storm, drought, flood or heat wave to the long-term warming trend.
Thankfully, that’s changing.

“The days of saying no single weather event can be linked to climate change are over,” said Heidi Cullen, chief scientist at the nonprofit Climate Central and a thought leader on this issue. “For many extreme weather events, the link is now strong.”
Take the heat record that the National Oceanic and Atmospheric Administration confirmed Thursday, for example. February 2016 was the most abnormally hot month in the history of weather records, which date back to 1880.
But it’s just one month, right? Could it be a fluke?

Well, there’s actually an answer.
Talk to Geert Jan van Oldenborgh, a climate researcher at the Royal Netherlands Meteorological Institute, and he’ll tell you that, based on preliminary data from NASA, 0.9 to 1 degree Celsius of the abnormal warming seen in February came from global warming.
Far less than that — 0.2 to 0.3 degrees — is the fault of El Nino.

So, yes. That was mainly us.
And that’s a relatively easy mystery to solve. Harder is pinning a specific weather event in a specific location on fossil fuel pollution.
That’s where Williams comes in.
His focus: drought.

I visited him at Columbia’s Tree Ring Lab, which is upriver from Manhattan on a beautiful and wooded stretch of the Hudson River, to try to figure out how this works.
The answer has something to do with the slivers of tree trunks that are packed into a closet in the lab. They’re thinner than a pencil and much longer, drilled from tree trunks from places as far-flung as Pakistan, Indonesia and Alaska. They’re filed into tiny drawers.

Tree rings are a “tool to travel back in time and understand how bad droughts can get,” Williams told me. Each ring is an annual weather record. Wet years are fat rings; dry years thin.
Researchers at the Tree Ring Lab are working to create an “atlas” of droughts around the world — when and where they happened, and how bad they were.

This context helps climate sleuths like Williams decide how current droughts fit into the historical record. The more we know, the better we can say what’s normal or abnormal now.
(Other “climate attribution” researchers use computer models to simulate events with and without the presence of human-produced carbon dioxide in the atmosphere).

One of Williams’ most recent cases: The 2012-to-2015 California drought.
That drought, which cost the state $2.7 billion last year alone, was about a fifth more severe because of global warming, he found. You can do a little math and put that another way: About 17% of the drought was our fault.
To get those numbers, Williams used computers and the historical climate record to “dissect” the drought into components like temperature, wind, precipitation and evaporation.

A lack of precipitation — which he doesn’t blame on humans — was the main driver of drought. But climate models show that California was hotter than it otherwise would have been during that period because we’ve polluted the atmosphere with carbon dioxide.
So that extra heat didn’t cause the drought, but it was enough to increase its severity.

Sitting on a bouncy ball in front of his office computer, Williams pulled up two maps of California to make his point. On the left was reality: 39% of the state saw record-breaking drought, the worst of it represented with a wine-colored blob on screen.
On the right, the “counterfactual” case, without carbon pollution.
Only 29% of the state would have seen record drought.
The wine-colored blob was slightly smaller.

Among the areas hit harder because of global warming was the San Joaquin Valley, which produces much of the nation’s food crop (and in which I spent a lot of time in 2014).
That small difference in temperature matters a lot out there.

From lake to puddle

Williams grew up just north of that valley, near Folsom Lake, which became a symbol of the Western drought when it was reduced to just a “puddle,” as he described it to me.
He told me he remembers driving across that lake’s dam to get to elementary school as a child. He saw lake levels that were crazy-low then. Drought long has been a reality in the American West. But he’s always curious: Are things different now? Why? How much?

Science hasn’t answered these questions with perfect precision.
These findings, including Williams’ assessment of the drought, are the subject of debate. (The science of long-term climate change at the global level, meanwhile, is not; 97% of climate scientists agree we’re causing it, and our understanding is solid).
But better computing power and knowledge of the historical climate are helping advance this type of “climate attribution” research.

There’s, of course, a chance that lawyers will grab hold of these concepts and try to sue polluters over the effects of climate change. Yet that might not be such a bad idea. There’s ample blame when it comes to global warming. All of us in the industrialized world are at fault.
But the more powerful concept may be the one that also seems to drive Williams: understanding.
If we use climate forensics to understand how we’re changing the planet, then we might also wake up to the fact that there are proven and simple fixes to this crisis.

Our fingerprints are all over the weather these days.

I’m thankful science is starting to show us exactly where.