Home > News > Lyrid meteor shower lighting up the nigh... 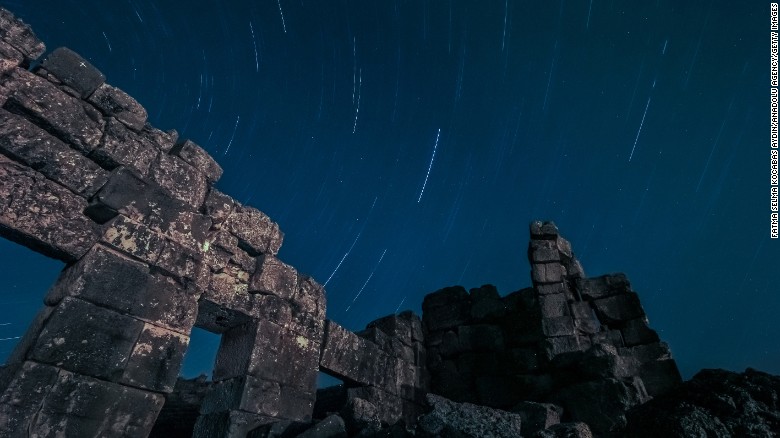 Look for spectacular shooting stars this week as the annual Lyrid meteor shower light up the nighttime sky.

Although the meteor shower started Thursday and goes through Saturday, the best times to view the shooting stars will be Wednesday into Thursday before dawn.

It’s an especially good year to spot the Lyrids.

“This year the moon will be a waxing crescent only 1/15th the brightness of a full moon, and it will set early, allowing excellent dark sky conditions for this shower,” Slooh Community Observatory astronomer Bob Berman said in a statement (PDF).

The Lyrids, which are pieces of debris from a comet, have been observed for more than 2,600 years, according to NASA. Each year around this time, the Earth runs into the comet’s debris stream, which causes the shower.

Dust off the lawn chairs & get ready for the Lyrids #MeteorShower tomorrow night. Details: http://t.co/Aq0lPHD4wG pic.twitter.com/5OEai5BbXR

“For the 2015 shower, I’m expecting 15 to 20 Lyrid meteors an hour,” the NASA Meteoroid Environment Office’s Bill Cooke wrote on a NASA blog.

Stargazers in Europe may have the best views, but many people around the world should be able to spot the Lyrids. And there’s no need to buy special equipment to spot the showers. Find a patch of a dark, open sky away from artificial lights, “lie down comfortably on a blanket or lawn chair, and look straight up,” wrote Cooke.

Or head to your computer. NASA’s Marshall Space Flight Center will livestream the event starting at 11 p.m. ET Wedensday. Slooh’s livestreaming event starts at 8 p.m. ET Wednesday. Use the hashtag #SloohLyrids to ask questions that could get answered live.

Among the stars: Your shots of the cosmos â€“ This breathtaking moonrise over the Sahara was taken by Slovenia-based photographer Iztok Medja, while in Morocco. In a former job as a nautical skipper, he would spend many night shifts gazing longingly at the sky. He says that it was while he was away from the light pollution of the city that his passion for night photography emerged.

Among the stars: Your shots of the cosmos â€“ Along with several other camera club members, iReporter Allan Qua Borebor made his way to one of the piers in Caramoan, in the Philippines, at around 11 p.m on June 30th. “The place was so quiet, so serene and so dark … We were so lucky because a thousand stars showed up,” Borebor recalls. “It was a perfect night together with friends.”

Lyra is only 12 degrees up in auckland and farther south even less,this isnt well seen in new zealand,lyra doesnt rise till about 3am either,this is a northern hemisphere event though you posted a web link to watch.