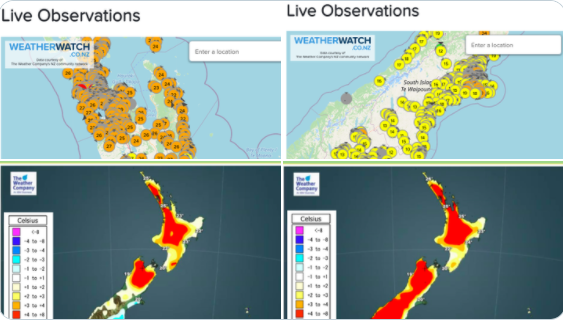 As of lunchtime Tuesday it was cooler than average in Dunedin and other parts of the south eastern South Island.

Tomorrow much of the country – including areas cool today – will be warmer than average as warmer winds move in.

What’s going on with Summer in Christchurch? Doesn’t feel like we’ve even had or having one. Endless cloud and breezy conditions mixed with unseasonable rain. Very few days over 25. The trees outside my house are already starting to get red tinges… And usually they don’t start until early to mid Feb. Can you shed any light on this?!! Whats going on and when’s it gonna warm up?

Hi Sam, thanks for the question, it sounds frustrating! It’s a fairly classic La Nina set up where Christchurch has more cloud and lower temperatures. It’s made a little worse by an overly active Southern Ocean weather pattern this year too which is injecting the odd southerly in. Tomorrow is hotter, but overall it’s not likely to be an exceptionally hot summer for you unless we get more north to north west winds.(usually more likely later in summer).
Cheers
Phil D