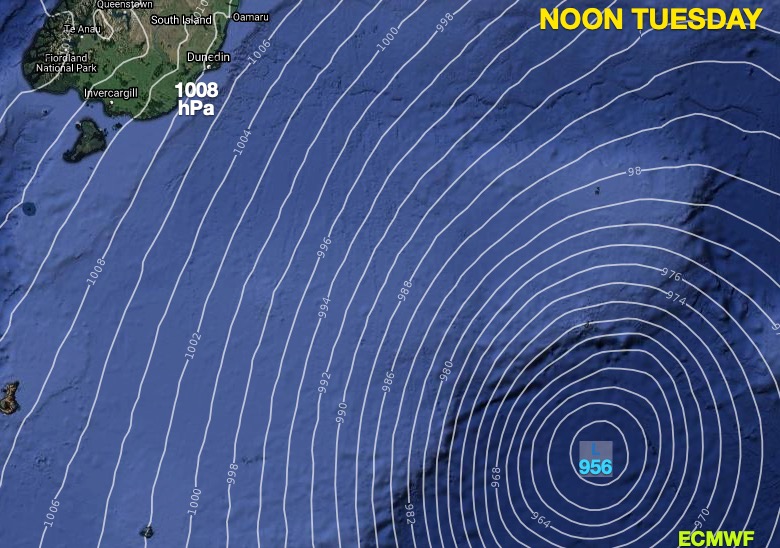 New Zealand has that sinking feeling. Air pressure is about to drop significantly in the lower South Island (and across a large portion of New Zealand) as a storm rapidly develops just offshore to our south and south east.

The low’s centre looks likely to hug the lower South Island on Sunday and Monday, then deepen rapidly into Tuesday when it’s likely to peak in power.

Dunedin’s air pressure is expected to drop from 1002hPa at 11pm Saturday to just 979hPa by 11pm Sunday – a fall of 23hPa in 24 hours as high pressure slips away and the deepening low moves in.

The low itself isn’t dropping this much air pressure in that time frame, but will rapidly deepen on Monday and Tuesday as it pulls south east away from New Zealand. As WeatherWatch.co.nz forecast eight days ago this Southern Ocean storm has the potential to drop into the 950hPa range and that is forecast to happen on Tuesday based on reliable modelling.

A low this deep will create dangerous beach conditions and those walking near beaches should take care.

The low is complicated, linking with other Southern Ocean lows – so these air pressure readings may shift a little, but it gives a clear indication that this is a serious area of low pressure to monitor and severe weather will be forming in the New Zealand area over the next 72 hours.

Monday and Tuesday look to be the peak of stormy weather in the New Zealand area. It’s worth noting this storm will be more powerful once it departs New Zealand, shifting more severe weather out to sea but severe weather warnings are likely and people should keep up to date with tax funded warnings from Government forecaster MetService.

WeatherWatch.co.nz will have more details on Sunday about this developing storm.

You can now view barometric graphs and data – for free – by visiting www.RuralWeather.co.nz. Here’s how to find it…

HOW LOW WILL DUNEDIN GO?

HOW LOW WILL THE LOW GO?!

is a thunder storm hit nelson