Low out west on Wednesday 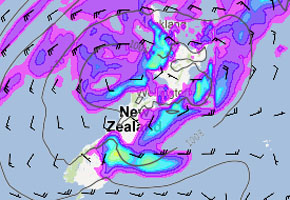 The low currently moving towards New Zealand will sit out west tomorrow with a west to northwesterly airflow coming around the top and a south to southeasterly airflow around it’s southern edge.

Therefore skies are going to be cloudy on the east coast of the South Island with rain, dry periods at first in the morning north of Christchurch however, rain in South Canterbury and north Otago will be heavy at times. Heavy areas of rain spreading to other hilly areas north of South Canterbury in the evening. Skies clearing up on the West Coast during the day.

The North Island should get some dry weather again at first however showers again by mid morning in the west becoming heavy at times, north of Taranaki there is a risk of thunder. Mostly fine in the east with light winds, showers south of Hawkes Bay in the afternoon however.

The wet weather will gradually clear on Thursday then on Friday a ridge delivers a spell of settled dry weather for all with light winds. On Saturday northerly quarter winds pick up with rain entering Northland ahead of the next incoming low, wet weather becomes more widespread across most of the country on Sunday.

Areas of the West Coast in the South Island look to escape wet weather for the second low especially south of Greymouth due to the east to southeasterly airflow so if your planning any trips this coming weekend it could be a good destination.