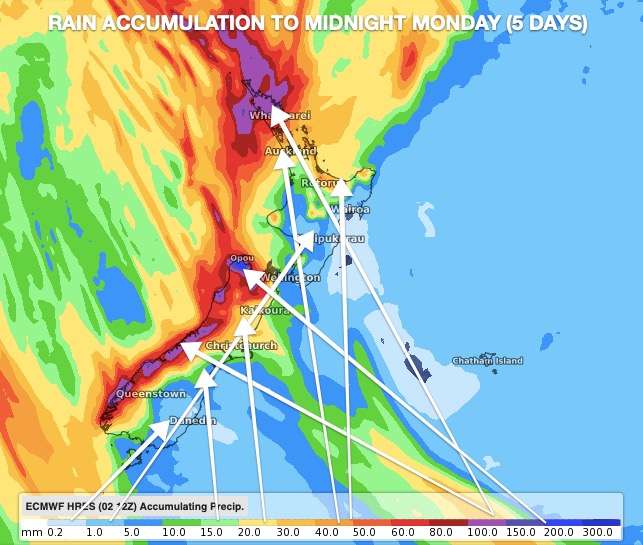 A dominant high pressure system covers New Zealand for the next couple days but the calm weather will give way to windier northerlies and pockets of rain – with isolated heavy falls this long weekend.

Rain will expand across New Zealand from Saturday night into early next week as a low pressure system approaches from the Tasman Sea but is held up by the very slowly departing high to NZ’s east.

Between this area of low pressure and the departing powerful high will be an atmospheric river developing in northern NZ – a current of moisture-rich air which can produce slow moving heavy rain.

Heavy rain moves into the Nelson Ranges too, with over 100mm possible which may lead to some valleys having flood risks.

Then Northland is the next exposed area for heavy rain. While general totals are 40 to 60mm there will be some pockets that exceed 100mm and this may again lead to localised flooding. (The flooding we saw in Canterbury this week was far more widespread and not what we’d usually call “localised”).

The northerly quarter airflow means many regions will be mild for this time of year across the long weekend.

North Island Risks
Northland (the eastern side) looks to have the highest rainfall totals and for the most part around 40 to 60mm will fall, but some isolated pockets may get 100mm+.  The rain is more likely going into Sunday/Monday and Tuesday.  Risks then shift further down towards Coromandel Peninusla and Bay of Plenty.  Sorry Hawke’s Bay, you’re not likely to get a lot from this set up – but you should get something.

South Island Risks
Mostly on the West Coast from the glaciers southwards where up to 200mm may fall in some locations over the next number of days – watch for slips or flooding on the West Coast. The Nelson Ranges are also exposed to get some heavy falls with risks of localised flooding.

Canterbury, rainfall numbers are low for you and while some spillover rain from the West Coast is possible, it isn’t likely to be too significant for you – but with rivers still swollen extra caution should be taken until next week. Keep up to date with your local RuralWeather.co.nz rainfall estimates – they are updated hourly.

Remember – for the most up to date rainfall totals at YOUR LOCATION – please visit www.RuralWeather.co.nz