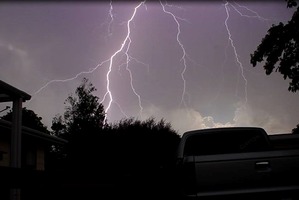 Two people hit by lightning yesterday have survived to describe a flash of heat, a walloping sensation and tingling.

Power went out and crops were damaged when a “fast and furious” electrical storm swept through the Gisborne district late yesterday afternoon.

There was loud thunder and more than 1000 lightning strikes mixed up with heavy rain and huge hailstones.

The storm caused power outages, plenty of worry for growers and two fisheries officers ducked for cover after a close encounter with a lightning strike.

Ministry of Primary Industries fisheries compliance manager Tom Teneti said fisheries officer Laura Hansen was on patrol with two other officers at Sponge Bay when they were struck.

It was not a direct hit but close enough for Laura to instinctively dive to the ground, Mr Teneti said.

“She was absolutely shocked by it. Both officers were stunned mullets momentarily.

Fisheries officer Martin Williams had a few metal objects on him that would have acted as conductors.

“It was like a percussive force. I felt like I had been walloped. My whole body was tingling. I felt a flash of heat.”

The pins and needles sensation continued for about 10 minutes afterwards, he said.

Laura bought a Lotto ticket afterwards and Mr William was buying one today.

Eastland Network has had a busy few days because of the daily electrical storms and multiple lightning strikes on equipment.

General manager Brent Stewart said staff had been out attending to faults from lightning strikes on the network for the past two days in Gisborne, Wairoa and the East Coast.

Damage was more pronounced in more exposed places and lightning has struck in the same place more than once . . . faultmen in many cases have returned to the same areas to repair faults.

Many people lost power at about 5pm. Most were restored straight away but some problems took longer.

Apples are among the affected crops and growers are still unsure of the extent of damage.

Kaiaponi Farms manager Scott Wilson said there did not appear to be any serious damage from an economic point of view but the sporadic way the hail fell around the Flats meant there would be growers around the district with the whole range – from severe damage to nothing at all.

When this happened, one grower could experience severe damage and a neighbour nothing.

“In our opinion, the hail was big enough to cause damage but it looks like we did not get any significant damage.”

The hail would potentially increase the disease risk for crops because of foliar damage.

Mr Wilson said the full extent of damage would not be known for a week.

Kiwifruit crops had some damage which was still being assessed.

Horticultural consultant Trevor Lupton said there was certainly some damage to kiwifruit orchards.

Kiwifruit grower Tim Egan said the two hail events in the past two days had caused some issues.

“It’s a bit early to tell, but there will be some leaf damage. We think we might have dodged a bullet at this point, but we are still nervous about the ongoing weather pattern,” he said.

Winegrowers association president Doug Bell said he was not aware of any hail damage to grapes at this stage.

“We did get hail but it was not of long enough duration to cause any visible damage.”

Indevin regional vineyards manager Andrew Blakeman said they had sustained a little bit of leaf damage on one block.

Waimata Valley resident Jenny Grzeda said it was a fast and furious hailstorm there.

“My husband had just come home from work and we were discussing the day’s events when we heard a ping, ping noise. Looking outside we could see something flying in the air from what seemed all angles.

“At first the hailstones came intermittently, then there was a drumming sound on the roof. Looking outside, we could not believe the size and speed of the hailstones.

Worried about the vehicle parked outside and their young ducks, they raced outside.

“I was so frightened at the size and speed of the hail that I sheltered under the lid of a rubbish bin to get to the vehicle. Unbelievably, we escaped any damage and when it was over Max and Theo went out to investigate and said they were amazed at the size of the hail and how cold and hard it was.”