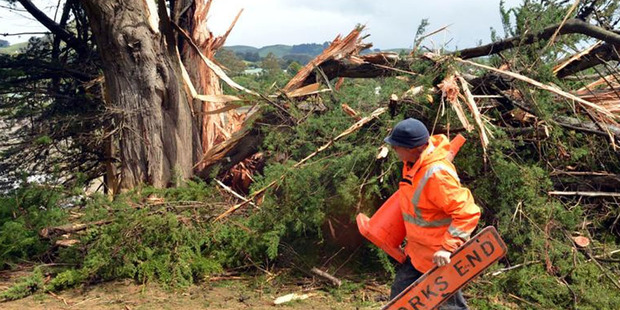 A huge macrocarpa tree exploded, sending pieces 70m into the air, after it was struck by lightning during a spectacular storm in Dunedin yesterday.

Portobello Deli owner Alan Cameron said he was in the storeroom sorting stock when the tree, in nearby Hatchery Rd, exploded about 1.30pm.

”Then there was this huge flash and an almighty boom.

”It was like someone set off an artillery round right next to me.

Mr Cameron said he ran outside to see smoke and steam coming off the tree.

”Bits of splintered tree were still floating down out of the sky.

”The tree had exploded. It’s quite spectacular. I’m glad I wasn’t under it when it happened.”

He believed the lightning had boiled all the moisture in the tree instantly, causing it to explode, and pieces of the tree were found up to 70m away.

Senior Constable Lox Kellas, of Portobello, said he heard reports of a woman walking two dogs near the tree when the lightning struck.

A ”dishevelled” woman in a state of shock knocked on a the door of a nearby house, Const Kellas said.

Over a calming cup of tea, the woman recounted how she was by the tree when the lightning bolt hit, he said.

He warned people not to go near the ”absolutely munted” tree.

The lightning strike had made the tree very unstable, and what remained of it could easily fall over in a strong gust of wind.

An arborist would stabilise the tree this morning, he said.

Government observations showed thunder and lightning moved across coastal Otago in waves yesterday, and 10 to 20 strikes were recorded over Dunedin between 4pm and 4.30pm.

Because the storms were isolated and short, they were not showing up as significant rainfall on the region’s rain gauges.

The St Clair Salt Water Pool closed for 30 minutes yesterday afternoon as a safety precaution, when lightning came close to the pool.

– If you have any photos of storm damage, send them through to us on Twitter or check out our Facebook page!