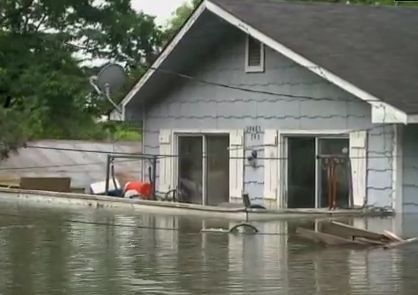 The Mississippi River drew to within a finger’s length of the highest level ever recorded at Greenville, Mississippi, on Wednesday NZT as a flood of historic proportions continued to slink its way to the Gulf of Mexico.

Levees along the length of the river appeared to be holding and water diverted through spillways seemed to be rising more slowly than expected, but Louisiana Gov. Bobby Jindal warned residents there’s still plenty that could go wrong.

“There’s still an awful lot of water headed our way, and it’s going to be here in many case for weeks, not just a few days,” he said.

The U.S. Coast Guard closed the Mississippi River around Natchez, Mississippi, to prevent damage to levees from passing barges, especially near Vidalia, Louisiana, where authorities have been fighting to keep the river out of that city’s convention center and drinking water supplies, according to federal and state officials.

The Coast Guard also reported river closures near Berwick and Morgan City, Louisiana, and at Bayou Chene, where workers submerged a barge to push floodwaters into wetlands and away from populated areas.

In Mississippi, 4,818 people have been displaced by flooding so far, said Jeff Rent, a spokesman for the state Emergency Management Agency.

In Louisiana, more than 4,000 people had evacuated, Jindal said, citing figures compiled by parish authorities. But he said no shelters have been opened in the state.

The crest began passing to little effect Tuesday in Greenville.

A few minor sinkholes have popped up around the Greenville area, but the local levee board has quickly patched them up, Mytries Sutton of the Washington County Emergency Management Agency said Tuesday. Fewer than 100 structures have been flooded, she said.

The river was cresting Tuesday at Greenville, the National Weather Service reported, with a morning reading of 64.2 feet, more than 16 feet above flood stage.

By the weekend, floodwaters are expected to peak at record levels in Vicksburg, Mississippi, and Natchez, as well as in Red River Landing and Baton Rouge, Louisiana, according to the weather service.

“It is very difficult to grasp the idea of the possibility of our communities flooding,” said Mary Beth Hanks, who has a home in New Roads and a fishing camp in Batchelor, Louisiana. “What would we do? Where do we go?”

For the first time in its history, the U.S. Army Corps of Engineers has opened three floodways, one in Missouri and two in Louisiana, to ease pressure on levees the length of the river and reduce the possibility of devastating flooding in highly populated areas.

The Corps of Engineers opened two gates in the Morganza Spillway on Saturday, the first release from the facility since 1973. By Monday night, 15 of the structure’s 125 bays had been opened, diverting about 102,000 cubic feet (763,000 gallons) of water per second, Corps spokeswoman Rachel Rodi told CNN.

The plan is eventually to open about a quarter of the spillway, according to the agency.

At the Bonne Carre Spillway, which feeds into Lake Pontchartrain, 330 of 350 bays were open, with water coursing through it well above its rated capacity.

“On the river side of the spillway … the water flowing was rather calm, but as the force of water rushed through the bays, you see its tremendous power,” said Diane Truax, a Norco resident, who has been keeping a close eye on the river.

In St. Landry Parish, which is expected to receive some of the water released through the Morganza Spillway, Sheriff Bobby J. Guidroz said that while the National Guard is hard at work building a levee to protect a refinery in Krotz Springs, the biggest job for his deputies is trying to prevent looters from rifling the homes of evacuated residents.

“We’re out in boats, trucks and cars,” he said.

Butte Larose, Louisiana, where predictions of up to 15 feet of water drove most residents of the 600-home community to evacuate, was a virtual ghost town.

“I moved everything out of the bottom and put everything I could upstairs and brought it to my mother’s house,” Neil Rabeaix of Butte Larose told CNN affiliate WWL-TV in New Orleans.

Brandi Chiassom loaded a truck full of personal belongings from a home that had just been remodeled.

“All that work. There’s nothing we can do. We just pray for the best,” Chiassom told CNN affiliate WGNO-TV in New Orleans. “We pretty much know our house will be under water so we’re trying to save everything we can.”

Mike Stack, a Corps of Engineers spokesman, told CNN’s “John King USA” that 20,000 to 25,000 homes could be flooded, but the agency and Louisiana authorities are working to limit the damage.

“The system is under tremendous pressure, and it will be for a long time, so our key concern is making sure that we’re vigilant,” Stack said. “We’re out there on the system, making sure the system stays intact while we’re still working with the communities to try to help with the flooding.”

Officials said the spillway gates are likely to be open for weeks, and it will be weeks before the river falls below flood stage and those who have evacuated can safely return.

The flood is the most significant to hit the lower Mississippi River valley since at least 1937 and has so far affected nine states: Missouri, Illinois, Kentucky, Tennessee, Ohio, Indiana, Arkansas, Louisiana and Mississippi.

As many as 22 cities and communities where river levels are monitored by the U.S. government remain flooded, some of them weeks after both the Mississippi and Ohio rivers climbed out of their banks.

Across the South and lower Midwest, floodwaters have already covered about 3 million acres of farmland, eroding for many farmers what could have been a profitable year for corn, wheat, rice and cotton, officials said.

In Melville, Louisiana, the rising waters brought back bad memories from the record floods of 1973 and a sense of hopelessness as the Atchafalaya River encroached on Wendy Moreau’s home.

“To be honest with you, we don’t have no money to start over,” she told CNN affiliate KALB-TV in Alexandria, Louisiana. “I don’t know what we’re going to do, we just live day to day and try to survive.”

Thinking of floodwaters they can be so destructive, a horrible situation for the people affected. Hopefully the levees will continue to hold.