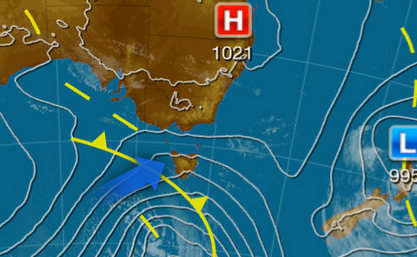 Winter has finally arrived in Tasmania this week after dry and record-breaking warm start to June in Hobart.

Tasmania has been noticeably warmer and drier than usual so far this season thanks to a lack of significant cold fronts in recent weeks.

As of 9am today, Hobart had only received 2.8mm of rain so far this month, making this the city’s driest start to winter in 38 years and the second driest start on record.

Along with a lack of rainfall, Hobart has also experienced a record warm start to winter this year. The average maximum temperature during the first 22 days of June was 14.7 degrees, which is a whopping three above average and half a degree warmer the previous record from 1962.

Things are certainly feeling more wintry this week though, as a procession of cold fronts affects the state.

Hobart had its coldest day of the season yesterday behind a mid-week front. While the mercury reached a top of 10.2 degrees, wind chill made it feel colder than five degrees during the middle of the day.

Another front will sweep over Tasmania today and drop temperatures once again. Showers will accompany the blustery change as it sweeps from west to east during the late morning and afternoon. The air behind this front will be cold enough to produce snow as low as 400 meters above sea level in the state’s south late this evening and early on Saturday morning. Small hail is also possible.

Saturday will remain chillier than recent weeks in Tasmania, although wind and showers will ease for most areas as the front moves into the Tasman Sea.

The next front in this series will cross the state on Sunday, bringing another burst of wind, showers, small hail and snow.