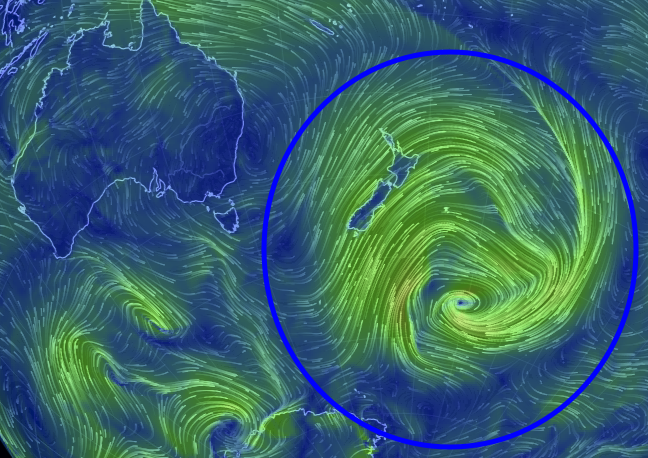 The low affecting NZ today is currently the largest on earth and covers an area from just south of Fiji to Antarctica’s ice shelf – an area that is much greater than the size of Australia.

WeatherWatch.co.nz says the significant storm is well south of New Zealand and, incredibly, only a small portion of the low is actually affecting our country. The other 80% is mainly south east of us.

The forecast air pressure at the centre of the low over the next 24 hours is 935hPa (hectopascals)- to make sense of that, Hurricane Katrina had a central air pressure of 920hPa when it made landfall in 2005 near New Orleans.  Average air pressure is 1013hPa.

The centre of this low is well away from any main centres in NZ – roughly 1000 to 1500kms to our south east, and is now slowly tracking away from NZ and will take until Wednesday AM to complete this.  So conditions have most likely peaked, but will remain windy and showery for many parts of the country until Wednesday.

Despite the intensity of the Southern Ocean storm, the worst of it remains well out to sea. New Zealand has had surprising snow to sea level in the North Island on Monday morning, in the Hawkes Bay city of Napier.  It didn’t settle or last longer than an hour.

In the South Island snow has affected Dunedin and parts of Southland and Otago, but as expected by WeatherWatch.co.nz it is mostly below troubling amounts. Some highways have been affected.

Blustery conditions remains around parts of New Zealand, with wintry showers – some with hail.  On Tuesday the low will track further to the south east and deepen – keeping conditions a bit windy and showery (and cold!) across both islands, but by Wednesday a high will be moving in and conditions will ease.

Milder weather returns to many places by Friday.