Kiwi captures ‘once in a lifetime’ meteor shot 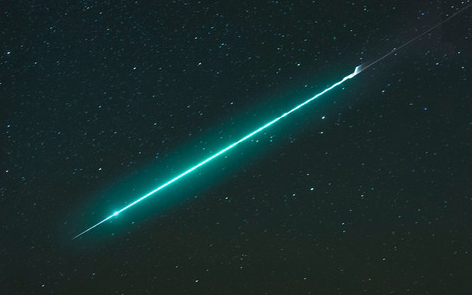 A Wellington photographer who captured a meteor flashing across the night sky believes the fluke picture might well prove the shot of his life.

An astronomer says the object that Jono Matla photographed at about 9pm last night was a fireball – a brighter-than-normal meteor – and was likely the size of a tennis ball and travelling at between 10km to 30km per second.

Mr Matla, who posted the shot on his Facebook page, happened to be out taking a six-shot panorama in Paraparaumu with a mate when he pressed the shutter button on his sky-facing Canon D and then saw the neon spectacle overhead.

“I was taking a photo for 30 seconds and it was on a timer – I wasn’t sure I’d captured it but I was hoping like heck I had while I was waiting.”

As it turned out, he’d snapped the fireball beautifully – framing it against a black night sky in the instant before it vanished.

Mr Matla, who has only just got back into photography, said the prized shot was the perfect inspiration to get out and about more with his camera.

“It was a highlight, for sure. I’m definitely going to get it framed and put it on the wall.”

As for what the chances of him getting the picture was, he said: “I imagine it would be quite miniscule.”

Dr Grant Christie of Stardome Observatory said fireballs as bright as last night’s were reported about once or twice a year – but were seen in the early night sky only as often as around once a decade.

Most meteors were typically just the size of a grain of sand and flashed for just a second, but this fireball – an object that appears brighter in the sky than Venus – might have been as big as a tennis ball, he said.

Dr Christie said the fireball would have burned up at a height more than 70km above the Earth – larger objects that were big enough to create sonic booms when they disintegrated could come as close as 25km.
According to Nasa, small chunks of rock and debris in space are called meteoroids.

They become meteors, or shooting stars, when they fall through a planet’s atmosphere, leaving a bright trail as they are heated into incandescence by the friction of the atmosphere.

Pieces that survive the journey and hit the ground are called meteorites.

One person posted that they had seen a “very bright shooting star” about 9pm in Hastings.

“It looked like a fireball that got bigger as it was falling and then just burned out.”

A person in Mt Roskill described seeing what they initially thought was fireworks.

“But this thing was no fireworks, the green light was the size of a basketball, heading horizontally on a downward slope across the sky.”

Others reported seeing the light over the King Country, Manawatu, Taranaki, the top of the South Island and Canterbury.

– Check out our eyewitness meteor reports, and let us know if you’ve seen anything yourself, here.

Hi, is that wellington photographers picture for sale?!  Sarah

Feel free to have a look at his facebook page through the link above in the story, then flick him a message 🙂