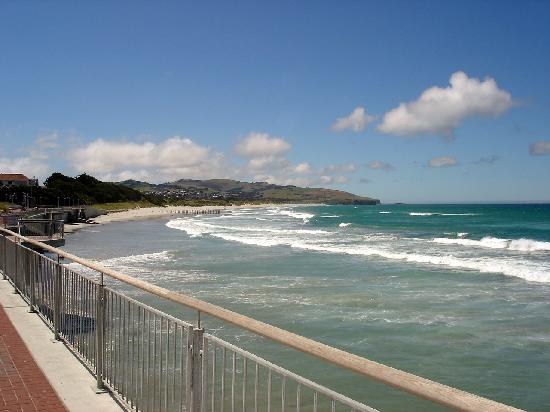 Sinkholes at the Esplanade at St Clair will be filled with gravel as concern builds about high tides expected later this week.

The tides are similar to those that three weeks ago stripped St Clair Beach of sand, exposing the sea wall’s toe and undermining the Esplanade.

It was “fair to say” that because the fill had gone from behind the sea wall, council staff and engineers were “a bit nervous” as to how the wall would stand up to the pounding waves the high tide would bring, council roading maintenance engineer Peter Standring said yesterday.

It had been decided to fill the small gap between the sea wall and the old sea wall behind it with fine pea gravel, and then fill the sinkholes with bigger AP40 gravel, to brace the walls and support the wall’s anchors.

The use of gravel meant if there was any need in the future to drill down into the holes, it could still be done.

On the beach, part of the St Clair Surf Life Saving club’s beach access ramp was removed at the weekend so contractors could plug the final gap under the wall.

Mr Standring said the ramp was basically dangling in its place and was too dangerous to work under.

The concrete ramp was old and unsafe and it was decided it would be replaced with a new ramp as part of the work on fixing the sea wall, he said.

Contractors who had gone to the southwest end of the beach to move big rocks back on the rock wall there, found the bottom section of a set of stairs had come adrift, and the stairs had been removed.

The steps have been blocked off for safety reasons.

Mr Standring said the future of those steps was already “under a question mark” as earlier engineering advice had been they were at risk of ongoing damage from wave action.