Home > News > Katia could be major hurricane, may brus...

Katia could be major hurricane, may brush eastern US 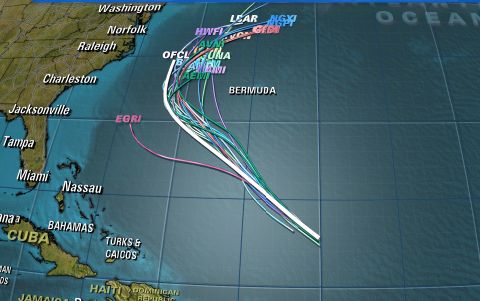 Hurricane Katia continued to intensify Sunday afternoon as it churned in the Atlantic Ocean, spurring warnings about rip currents and fears it could soon develop into a “major hurricane,” the National Hurricane Center said yesterday afternoon. Katia was considered a Category 2 storm — packing maximum sustained winds increasing to 170km/h, which are just 8km/h weaker than those that would make it a Category 3.

No warnings or watches are now in effect for the United States, but the hurricane center did warn that the “threat of rip currents (are) expected to increase along the East Coast … during the next few days.” East-facing beaches along the Bahamas and the Greater Antilles also may experience “large swells,” while similar conditions on the Northern Leeward Islands should improve Sunday night into Monday.

“These swells are likely to cause life-threatening surf and rip current conditions,” the hurricane center reported.

The storm is centered north-northeast of the Northern Leeward Islands, moving in a northwesterly direction. It is expected to slow down slightly through Tuesday, even as it continues to gain strength, according to the center.

Currently, Katia’s hurricane-force winds extend 70kms out from its center. Sustained tropical storms winds — blowing consistently at between 62 and 119km/h — can be felt up to 280kms out.

Katia’s likely path puts it on a trajectory northwest through the Atlantic, getting closer to the U.S. East Coast toward the end of the week.

CNN meteorologist Jacqui Jeras noted that most computer models show Katia largely skirting the eastern United States as it eventually moves northward. But North Carolina’s Outer Banks are part of its “cone of uncertainty,” a weather measure where forecasters think a hurricane’s center could go.