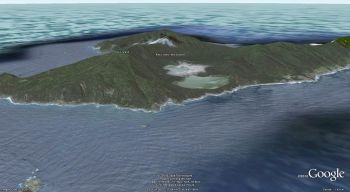 Exclusive — With the weather observations that forecasters access around New Zealand there are several for various islands that few, if any, people live on – such as Campbell Island, Enderby Island, the Chathams, Secretary Island and Raoul Island.

Apart from Raoul Island the rest always seem to have cold, stormy, weather (if anyone from the Chathams read this blog I’d love to hear from you with your comments on the weather where you live).

Raoul Island, for those who don’t know, is our northern most piece of land, part of the Kermadec Islands. It’s smack bang half way between New Zealand and Tonga and is home to some pretty aggressive volcanic activity over the years.

TVNZ weather expert Karen Olsen lived on Raoul Island for 13 months over 20 years ago and I spoke to her about her time on the island.

Karen worked for MetService and was based there to provide information to Wellington on current conditions and the island acted as an early warning station for any storms that may be moving south towards New Zealand.

The sub-tropical climate made conditions very pleasant to work in with temperatures usually in the mid 20s. Staff at MetService competed for the chance to work on Raoul Island – and when Karen Olsen was accepted she was the first woman to be stationed there.

Travelling by boat for 3 long days with her crew they finally set foot on Raoul Island on September 1988 and didn’t leave until October 1989.

From my chat with Karen it sounded like the island had a bit of Stephen King’s “The Shining” going on. The crew before her had personality clashes and from the sounds of it none of them were getting on too well when they left. On day one Karen’s crew agreed they would have to maturely discuss any issues that might arise from living in such close quarters for such a long amount of time. Their foresight in calmly dealing with any future issues meant they got on like “brothers and sisters” and remained close right up to their last day.

“It’s a test as a human being” says Karen.

“If you wanted something done you had to do it yourself.”. The island had a few animals – a cow for fresh milk, chickens for eggs, pigs for scraps. It wasn’t long before Karen needed a chicken feeder…and she had to build it. “I’d never built one before but I somehow figured it out”. On top of servicing all of her weather instruments and equipment she – and others – also had to do the other jobs that kept the facilities up and running – such as painting the buildings, making repairs – even cleaning out the septic tank. “You learn a lot. You learn what you’re capable of”.

There were 4 of them running the weather station – now it’s all automated. They had to send a couple of balloon flights a day – they measure the weather conditions at high altitudes. Of course with limited supplies on the island they had to make their own gas to get the balloons filled up. “We had a few that blew up” Karen mentions, pointing out it’s not that hard to do – but with a smile in her voice mentions there were a few duck and covers.

“Part of my job was to also measure the temperature and levels in the crater lake” which she says was pretty hairy at times. The active volcano exploded on March 17, 2006 and a DOC worker carrying out the same job Karen had done many times before was killed.

“It was like another planet”. If you look at Raoul Island on Google Earth you can appreciate what Karen means. The island is covered in thick forest except for around the lake which is baron with a ‘moon like’ landscape. Raoul is a small but mountainous island. Its highest peak is 516 metres. The island is filled with beautiful tropical trees, plants and birds.

So apart from the weather forecasting and the geological work – what else did you do? How did you unwind? “We had parties and socialised. We celebrated St Patricks day, died our food and beer green. We frequently went diving too”.

Karen says they had little contact with the outside world except for daily radio contact with MetService. The odd yacht would call in for “a cup of tea” while on their way to Tonga which was always a welcome visit.

When I asked her about funny stories she tells me about the time the pigs got loose. “They were charging around everywhere. They got into my office and I thought ‘there goes all my instruments’!”. “It took us an entire day to round them up!”.

Personally I love the outdoors…I love remote places. There are some parts of New Zealand that make you feel like you’re isolated from the world…but it must be nothing compared to living for 13 months on a small island with almost nothing manmade around you and just a select few group of people to work with – and to be so far away from the mainland, a hospital, or your family. However, in saying that Karen says “they were the best years of my life”. You can tell she is very deservedly proud of her time spent there – a time I assume must’ve shaped her life and helped her grow her appreciation for planet earth and the beautiful environment we live in.

This blog was written by Philip Duncan for NZHerald.co.nz in May 2009.