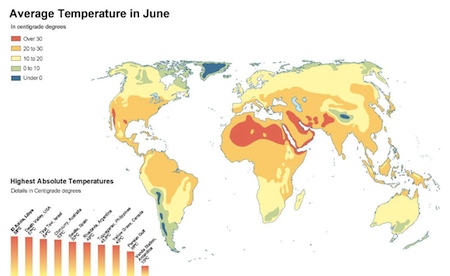 Last month was the hottest ever June worldwide, according to the National Oceanic Atmospheric Administration in the US, which tracks climate data over ocean and land – and records date back to the 1880s.

It followed the hottest May ever.

Blair Trewin, a climatologist at the Australian Bureau of Meteorology, says the record temperatures have to do in part with the coming El Nino, which raises global ocean temperatures, meaning bigger tropical storms in the Pacific.

“Yes, it was the warmest June recorded on a global level,” he said.

“Global records began in the late 19th century and, although some of the records don’t cover all of the period through, we have good records from the early 20th century on.

“What we have seen, while there have been fluctuations, is a definite strong warming trend in the last 40 years.

“It is certainly a significant event and, with the warming trend, we are seeing higher temperature records being broken from time to time, but the cold record temperatures are virtually becoming extinct.

“In a global sense, you expect higher temperatures to be associated with higher rainfall as you get an intensification of the water cycle, but then how much of that rain falls over land and how much of that falls over water is a completely different question,” Dr Trewin said.