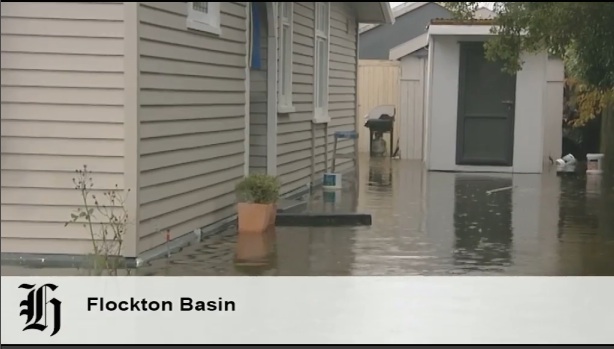 Prime Minister John Key says Christchurch’s flooding issues need to be resolved, and it’s up to the council to come up with a plan.

Residents in Flockton Basin are demanding action after their homes were flooded this week for the fourth time in just over a month.

Speaking in Christchurch today, Mr Key said the council as lead agency was meant to provide a proposal to the Government on the next steps, but hadn’t done so yet.

“It’s too long, and the real point here is that we can’t act until either the council makes us the lead agency or they provide us with a proposal,” he said.

“You can’t have hundred-year floods happening every two or three weeks. It’s ridiculous and people can’t live like that.”

Asked whether the council had put enough resources into the issue, Mr Key said he understood they had two or three people working on it.

“I understand the pressure is on the council. I’m not blaming them, I’m just simply saying that residents want answers and they’re entitled to answers . . . and we want to give them support.

“But every action we take has to be supported by the proper geotechnical advice.”

On how long the Government would wait before stepping in, Mr Key said he suspected – given the media attention – a proposal would turn up in his office quite soon.

“There is always a bit of natural tension and natural arm wrestle.

“Is it perfection? Probably not, but we want to work constructively with Lianne Dalziel the mayor and the council.”

Ms Dalziel said today a three-week deadline had been set for a taskforce report on appropriate fixes for flood-hit residents.

She said she could understand residents’ frustration, but the Flood Taskforce needed time to report back on temporary fixes.

“They’re looking for some answers now,” she told Newstalk ZB.

“I’ve asked the officials to bring back that taskforce – the first taskforce report – in three weeks.

“That will tell us what those immediate solutions are.”

Dire emergency for those affected by lack of action!