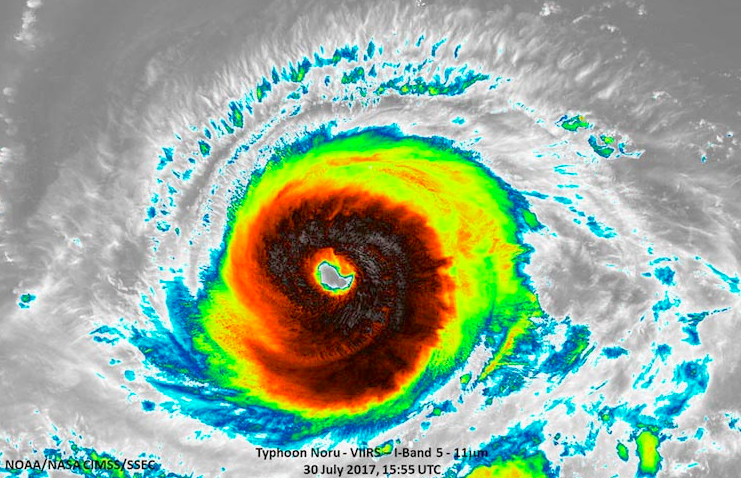 Residents of Japanâ€™s southern islands need to keep a close eye on Typhoon Noru. Noru was a strong Category 2 storm as of midnight last night (NZT), with top sustained winds (1-minute) of 90 knots (170km/h) as estimated by the Joint Typhoon Warning Center (JTWC). After hurtling to Category 5 intensity on Sunday, the typhoon weakened gradually on Monday as it lost the benefit of a high-altitude outflow channel. However, Noru is expected to re-intensify as it moves slowly northwest toward Japan, where it will encounter slightly warmer waters (above 30Â°C or 86Â°F), and into a region with more favorable upper-level winds.

Noruâ€™s northwest track is expected to bend slightly westward as it moves around a compact upper-level high parked near South Korea and the Sea of Japan. This is good news for Japanâ€™s key population centers, including Tokyo, as it would take the typhoon well to their southwest.

The large southern island of Kyushu, and the smaller archipelago of the Ryukyu Islands, may not be so lucky. By this weekend, the JTWC track brings Noru toward the west coast of Kyushu as a Category 3 storm. Such a track would put Kyushu on the more dangerous right-hand side of the typhoon. The official three-day outlook from the Japan Meteorological Agency angles Noru more toward the west over the next three days, which would bring the strongest impacts into the more sparsely populated Ryukyu Islands. A crucial question is how quickly the small upper high to the north of Noru breaks down, which is very difficult to predict at this point. The cone of uncertainty for Noru is, in reality, larger than is currently being depicted, given the higher-than-usual uncertainties in the evolution of the steering flow for the typhoon.

For what itâ€™s worth, the operational runs of both the European and GFS models re-intensify Noru into a fearsome super typhoon. The 0Z Tuesday run of the Euro model took Noru on a track similar to the JTWC forecast, looping just to the west of Kyushu, while the 0Z and 6Z Tuesday runs of the GFS moved Noru on a slower, more northward track that would affect Kyushu as well as parts of central Japan. Both models deepened Noru below 900 mb by this weekend, which would imply the possibility of a Category 5 supertyphoon, but these values are very likely unrealistic. This may be a good example of the current tendency of global models to over-deepen strong tropical cyclones at subtropical latitudes (roughly north of 25Â°N). Until recent years, the global models featured resolution that was too coarse to replicate the lowest pressures at the heart of strong tropical cyclones. Today, the upgraded, higher-resolution models can produce very low surface pressures more readily, but they do not fully account for the ocean-atmosphere interaction across subtropical regions. At these latitudes, late-summer ocean temperatures can be very warm over a very shallow layer that is quickly disrupted by a strong hurricane or typhoon. (Thanks to Julian Heming, UK Met Office, for this background.)

We should look at the HWRF model, which is our best intensity model, for guidance on how strong Noru might get. The 06Z Tuesday run of the HWRF model rebuilds Noru to Category 4 strength with 225 km/h winds, and predicts a track that would take the storm well west of Kyushu.

The Weather Companyâ€™s primary journalistic mission is to report on breaking weather news, the environment and the importance of science to our lives. This story does not necessarily represent the position of our parent company, IBM.