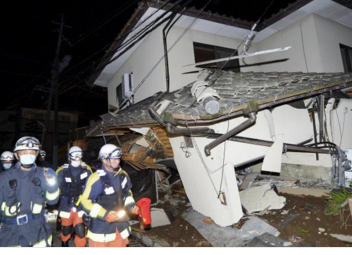 Search crews scrambled to dig through rubble in southern Japan, looking for people trapped under collapsed buildings.
The magnitude-6.2 quake struck near Ueki, the U.S. Geological Survey said. Dozens of smaller aftershocks followed.
“The ground shook for about 20 seconds before the 6.2-magnitude quake stopped,” witness Lim Ting Jie said.
Two deaths occurred in Mashiki, the Kumamoto Prefecture office said. One person died in a collapsed house, and the other died in a fire caused by the quake.

As many as 19 houses have been destroyed by an earthquake in Japan, trapping a large number of residents https://t.co/BTkdoY4KNd

At least 135 people were hospitalized in Kumamoto, city officials said.

Gen Aoki, director of the Japan Meteorological Agency’s earthquake division, warned more aftershocks could occur over the next week.
“This is an earthquake that is going to shake for a long time,” CNN meteorologist Chad Myers said.
That could mean many more building collapses.
“The buildings that were damaged in the original shock have now been redamaged or reshaken,” he said. “And all of a sudden you have a cracked building, and it wants to fall down with the second shake.”

An estimated 750,000 people felt “violent to severe shaking,” Myers said.
“The strongest shaking was right where the most people live” in the area, he said.
While the magnitude might not seem extreme, the shallow depth of the quake — just 10 kilometers (6.2 miles) — is significant.
“When you have a shallow earthquake, such as this one is, you have the potential for more damage because the shaking is close to the surface,” John Bellini of the U.S. Geological Survey said.
In addition to destroying 19 houses, the quake hurled items off store shelves and littered streets with rubble.
But there’s one bit of good news: The quake was centered mostly under land, not an ocean, meaning it did not spawn a major tsunami.

Jie said Thursday’s quake gave him a new appreciation for life.
“This experience has helped me to treasure my family members and relatives even more, and not take what I have and the people who support me for granted.”