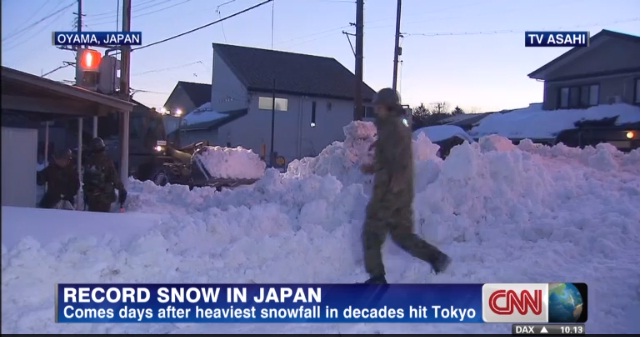 Japan was hit by record snowfall again this weekend as several prefectures in the eastern part of the country reported deaths as well as severe transport delays and disruptions.

The police have confirmed at least 11 deaths caused by the snowstorm across northeast Japan. More than a thousand people are reported to be injured from incidents caused by the heavy snow.

Elderly residents in Oyama in Shizuoka Prefecture were stranded in their homes following a snow dump of more than three feet (1 meter) on Friday. Other isolated communities were also cut off.

Tokyo experienced just under a foot (27cm) of snow over the weekend, days after the capital had experienced its heaviest snowfall in decades. A highway connecting Gunma and Nagano prefectures was closed, stranding hundreds of drivers, and the national broadcaster NHK said over 600 flights, mostly domestic, across the country were also canceled.

A commuter train collision at a station on the outskirts of Tokyo was also attributed to the snow by railway operator Tokyu Corp. Around 20 passengers were left with minor injuries in the incident.

The Japan Meteorological Agency has raised advisories for much of the country, and with the storm heading northwards, sections of northern island of Hokkaido have been placed under warning of heavy snowfall and avalanches.