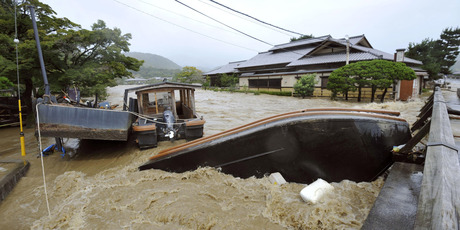 Typhoon Man-yi hit Japan, leaving three people dead and forcing the operator of the crippled Fukushima nuclear plant to release rainwater with low levels of radiation into the ocean.

The powerful typhoon made landfall in Toyohashi, Aichi prefecture, shortly before 8:00 am (11am Monday NZ time), packing gusts of up to 162 kilometres per hour, the Japan Meteorological Agency said.

Japanese news agency Jiji Press said a third person, a man aged 63, died after falling from a ladder he climbed to shut a window.

Kyodo news agency, citing local officials, said five people were still missing, while NHK said 128 others were injured with more than 4,000 houses flooded and at least 270 houses damaged by strong wind or landslides.

The typhoon, losing strength slightly, left Japan’s main island by Monday evening after the eye of the storm passed within 50 kilometres north of the capital at around noon.

The typhoon also hit the northeast, including the Fukushima area, bringing heavy rain to areas near the broken plant run by Tokyo Electric Power (TEPCO).

Workers were pumping out water from areas near tanks storing radioactive water, from which leaks are believed to have seeped into groundwater.

“But we decided to release the water into sea as we reached a conclusion that it can be regarded as rainfall after we monitored levels of radiation,” TEPCO spokesman Yo Koshimizu said.

According to the spokesman, one litre of the water contained up to 24 becquerels of strontium and other radioactive materials – below the 30 becquerel per litre safety limit imposed by Japanese authorities for a possible release to the environment.

However, it was unknown how much water was released to sea under the “emergency measure,” Koshimizu said.

The typhoon also forced the operator to cancel part of outdoor operations scheduled for Monday, although there was no damage to the plant following the typhoon, he added.

Around 300 tonnes of mildly contaminated groundwater is entering the ocean every day having passed under the reactors, according to TEPCO.

Earlier in the day, the meteorological agency issued the highest alert for “possibly unprecedented heavy rain” in Kyoto and neighbouring prefectures, while Kyoto and other local authorities advised some 340,000 households to evacuate.

Television footage showed the banks of the Katsura river in the ancient capital’s scenic tourist area of Arashiyama overflowing and inundating nearby hotels and souvenir shops.

Rescue workers and hotel employees were towing a small rowboat with four tourists on board in knee-deep water.

Railway companies temporarily suspended services on many lines in central and eastern Japan, including the Shinkansen bullet trains between Shizuoka and Mishima.