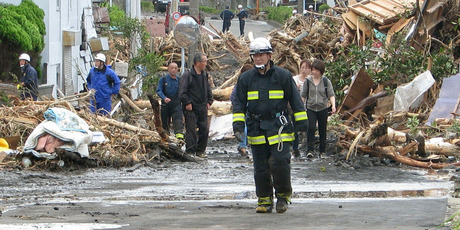 A typhoon has caused deadly mudslides that buried people and destroyed homes on a Japanese island before sweeping up the Pacific coast, grounding hundreds of flights and disrupting Tokyo’s transportation during the morning rush. At least 17 deaths were reported and nearly 50 people were missing.

Hardest hit from Typhoon Wipha was Izu Oshima island, which is about 120 kilometres south of Tokyo. Rescuers found 16 bodies, most of them buried by mudslides, police and town officials said. Dozens of homes were destroyed, and about 45 people were missing.

A woman from Tokyo died after falling into a river and being washed 10 kilometres downriver to Yokohama, police said. Two sixth-grade boys and another person were missing on Japan’s main island, Honshu, the Fire and Disaster Management Agency said. 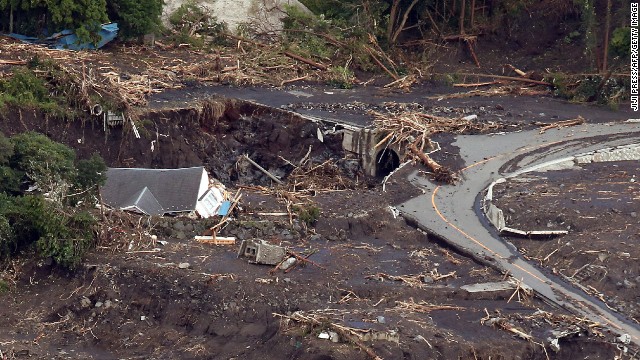 More than 350 homes were damaged or destroyed, including 283 on Izu Oshima, it said.

The typhoon, which stayed offshore in the Pacific, had sustained winds of 126 kilometres per hour, with gusts up to 180 kph, before it was downgraded to a tropical storm Wednesday evening.

The storm was moving northeast, off the northern Japanese island of Hokkaido.

More than 80 centimetres of rain fell on Izu Oshima during a 24-hour period ending Wednesday morning, the most since record-keeping began in 1991.

The rainfall was particularly heavy before dawn, the kind in which “you can’t see anything or hear anything,” Japan Meteorological Agency official Yoshiaki Yano said. 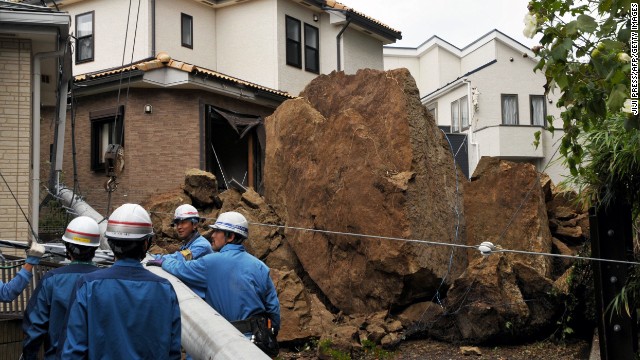 Izu Oshima is the largest island in the Izu chain southwest of Tokyo. It has one of Japan’s most active volcanoes, Mount Mihara, and is a major base for growing camellias. About 8,200 people live on the island, which is accessible by ferry from Tokyo.

Yutaka Sagara, a 59-year-old sushi chef on the east coast of the island, said he spent a sleepless night with colleagues at their company housing. Their hillside apartment barely escaped a mudslide that veered off to the side. Later he found out the mudslide crushed several houses as it flowed to the sea.

“People on this island are somewhat used to heavy rainstorms, but this typhoon was beyond our imagination,” he said by phone.

Sagara came down to his seaside sushi restaurant on foot, wading through knee-deep mud, to check things out and make sushi for rescue workers. 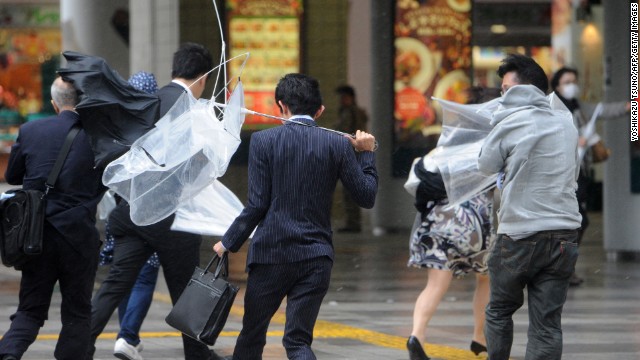 Prime Minister Shinzo Abe, speaking to Parliament on Wednesday, vowed to do the utmost to rescue the missing and support the survivors, while trying to restore infrastructure and public services as quickly as possible. Japanese troops were deployed to the island, as well as Tokyo’s “hyper-rescue” police with rescue dogs.

As a precaution, the Fukushima Dai-ichi nuclear power plant, crippled by the 2011 earthquake and tsunami, released tons of rainwater that were being held behind protective barriers around storage tanks for radioactive water. Tokyo Electric Power Co., the plant’s operator, said only water below an allowable level of radioactivity was released, which Japan’s Nuclear Regulation Authority allowed Tuesday. During an earlier typhoon in September, rainwater spilled out before it could be tested.