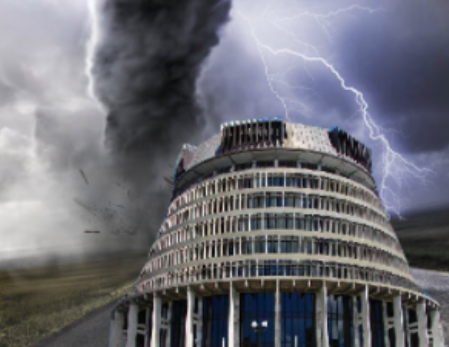 Niwa’s run of big weather news headlines that don’t eventuate continues with the NZ Herald once again headlining “violent” thunderstorms and stormy weather striking Auckland yesterday. Instead, it rained only.

The NZ Herald should know better, perhaps they just want the clicks, but Niwa are climate scientists not weather forecasters. The Herald and others have even covered this bizarre Government forecaster double up. But with the mainstream media outlets failing over the years at working out what is accurate forecasting and what is clearly clickbait from Niwa, it’s time the NZ Government stepped in to regulate the now two Government forecasters we all must tax fund.

In the opening sentence of the Herald story yesterday it read “A violent lightning storm is set to lash Auckland this afternoon as the latest storm strikes the top of the country”. The story then went on to quote Niwa, until MetService pushes back saying the risk for thunderstorms was, in fact, “low”. How are the NZ public served by funding two Government forecasters that, when it matters, can’t agree on severe weather? How dangerous is this to be officially told both sides of the coin will happen?

If Niwa is going to continue aggressively competing against MetService with tax dollars then the Government needs to regulate them both once and for all.

No other country on earth has two *commercial* Government owned weather forecasters – how many more examples does WeatherWatch.co.nz have to show with Niwa and MetService saying different things in severe weather events? It’s almost every event now.

Not only that, the Commerce Commission continues to investigate both Niwa and MetService for “abuse of marketplace power” and “anticompetitive behaviour”. Neither forecaster has denied these allegations. The Commerce Commission has been investigating for almost a year now and recently told WeatherWatch.co.nz they expect to update us in August.

There have been rumours floating around Parliament for some time that Niwa and MetService may be regulated if they can’t work together properly, according to our sources. We hope to see this happen because while the media gets a clickbait surge in ratings the public are then left with a taste of ‘Government forecasters can’t be trusted’ and this isn’t true. MetService accurately had low risk for thunder and MetService should be our one official weather voice out of the NZ Government.

NZ has high standards in so many areas, except with Government weather. As Minister Megan Woods said, “I get to spend their profits”. So if the Government’s weather industry is going to be this loose and sloppy and money comes before accuracy these days, then the least we can expect is for the Government to regulate itself, to ensure NZ has higher forecasting standards… that is the very least the public deserve here, after all the NZ taxpayers own 100% of Niwa and 100% of MetService and right now Niwa is using the power of scientific funding to erode MetService’s credibility and it needs to stop.