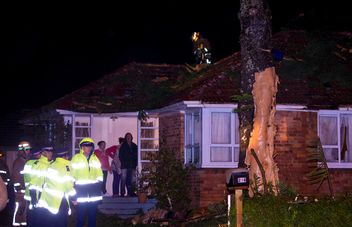 Wellington also bore the brunt of the wild weather, with gale-force winds cutting power to 25,000 homes and forcing the closure of the airport and cancellation of ferry services.

Wellingtonians said the weather was comparable to that experienced at the time of the Wahine ferry disaster in April 1968 that killed 53 people.

“Dad said the weather is as bad as it was when he was helping during the Wahine storm. That is scary,” said Hayley Colgan.

Joseph Romanos said: “I know it will sound like an exaggeration, but the weather in Wellington tonight really reminds me of Wahine Day. It’s wild, wild, wild.”

At Stanmore Bay, north of Auckland, 12 houses were damaged and windows blown out by trees hit by lightning at 10pm. One person was treated for chest pains.

Another person is believed to have suffered minor leg injuries after lightning hit a Norfolk pine in Pt England. It is understood the tree fell on at least two homes, scattering debris for up to 400m and cutting power to the street.

“There was an almighty crash like a missile coming through the window. Luckily the drape covered the window. The force of it was huge.”

The bark had been blasted off the tree from 30m away.

Fire Service Auckland spokesman Scott Osmond said it was been a busy night for staff taking the overflow of calls from Wellington, where the weather was described as one of the most severe storms seen in the city.

By 10.30pm, there were 500 incidents still pending, although double that number had been received and staff were still “flat out”.

In Wellington, roofs were blown off houses, an interisland ferry broke loose from its moorings, and fallen trees and landslips damaged homes and roads as wind gusts of up to 200km/h battered the city.

Power was cut to 30,000 homes and public transport was cancelled.

As the storm moved north, Aucklanders were hit by thunder, lightning and hail.

Swanson resident Jade Dobson said the hail was so bad that a boarder in her downstairs flat couldn’t get the door open. “It was about 10cm high in the corner where her door is.

“The whole driveway was white, the deck was white and my husband was skating up and down the driveway.”

A woman driving on the Northwestern Motorway by Brigham Creek said hail turned the ground white at 6.30pm.

“It looked like it was snowing; the whole motorway was white,” said Andrea Binning, 32.
When she returned to her Sandringham home, “it was hailing so hard that it turned our driveway to ice and all the cars were covered in hail. It hasn’t melted … It’s frozen on the ground”.

Ms Binning said the lightning was “pretty crazy. It was every minute and it was lighting up the whole of West Auckland”.

Eden Terrace resident Peter Green was on a bus when the hail struck about 9.30pm.
“All the pavements are white and the road outside is just ice.”

MetService forecaster Heath Gullery said intense hail was not uncommon in winter, but was probably more visible last night because it remained on the ground for longer.

The reason for that was the colder temperatures.

Last night’s hail and thunderstorms were part of a band of weather that was expected to ease this morning – making way for potentially damaging 120km/h winds.

Those winds would also be cold and would make the maximum temperature of 12 degrees seem much colder, Mr Gullery said.

In Wellington, wind speeds averaged 150km/h, said MetService. A gust of 200km/h was recorded at Mt Kaukau, and there were “phenomenal” swells up to 15m in the Cook Strait.

He said council crews were clearing roads and attending to as many trees as possible.

Conditions were treacherous and in many cases it would be too dangerous to do work.

Three emergency centres had been set up in Wellington City, Hutt City and Porirua and were being used by dozens of people who had lost power or had damaged homes, said Civil Defence spokesman Bruce Pepperell.

The Kaitaki ferry in Wellington broke its moorings, and had to be anchored in the harbour after it was unable to be brought back into its berth, it was reported.

Train services were cancelled, and buses had either stopped or limited their routes last night.

Karori resident Jessica Ranger said it was the worst weather she had experienced in Wellington.

“We are getting hammered by the wind. We can hear trees banging against the windows.”

Our property is on the Upper Harbour in Auckland, facing the South West. It is calm with not much breeze at all. I am wondering if we are missing most of the storm, as there has only been a little hail last night, and I was aware of the thunder off in the distance.
It does seem very localised.