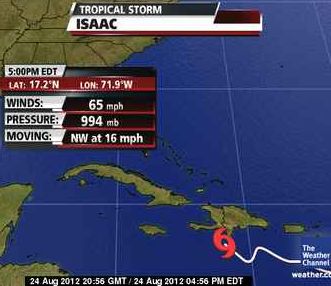 Tropical storm Isaac is getting stronger.  Over the last 24 hours we have seen a drop in the central pressure as it continued its slow westward track, passing south of Haiti and the Dominican Republic (the island known as Hispaniola).

Isaac is expected to make landfall in Haiti in the next few hours.  It is currently about 160km south-south east of the Haitian capital of Port-au-Prince.  Hurricane force winds are possible for Haiti and the Dominican Republic.  Rainfall amounts of 200-300mm are expected.  Isolated amounts of up to 500mm are possible

After Haiti, Isaac will head for eastern Cuba.  What happens next is critical to determining how strong Isaac will be when it heads for the US mainland.

The current forecast has Isaac tracking right along the island of Cuba.  That will keep the eye of the storm over land for the longest time.  That means by the team it leaves Cuba on late Sunday night or in the pre-dawn hours of Monday (Monday afternoon or Monday night NZT), it will have weakened considerably with winds down to around 80 km/h.

This track then takes Isaac back over the warm, open waters of the Gulf of Mexico.  The 48 hour forecast has a favourable environment for Isaac to strengthen in.  So those warm waters will be like pouring gasoline on a fire and Isaac should strengthen rapidly.  At this time, it’s expected to be a Category 1 hurricane by the time it reaches the US Gulf coast late Tuesday night (Wednesday afternoon/evening NZT).

It’s important to note that Isaac has an enormous wind field.  That means that even if it does follow the above track, taking it east of the Florida peninsula, both coasts will still be affected.  For that reason, Tropical Storm Watches have been issued for south Florida and the Florida Keys.  This includes cities like Boca Raton, Fort Lauderdale, Miami and Key West.  Heavy rain, high winds and isolated tornadoes are possible in these areas starting late Saturday night/early Sunday and lasting into early Monday.  That’s Sunday afternoon/evening to late Monday night NZT.

The reason watches have been issued and not warnings is because the exact track of Isaac will determine where the worst of the weather will hit.  That track is still uncertain at this time.

Regardless, Isaac’s threat to the US mainland is now being called “imminent”, however there is still much uncertainty regarding the strength and exact landfall location.

Stay tuned for further updates as we continue to track Isaac.

All images/  Courtesy of The Weather Channel