A northerly airflow strengthens over the South Island during Saturday as a front pushes in during the afternoon from the west, meanwhile a ridge over the North Island weakens later in the day.

For much of the North Island expect mostly sunny weather however there will be some high cloud about for most, winds light in the morning tending west to northwest in the afternoon. The east coast may see an afternoon sea breeze develop. Temperatures reaching into the mid to late 20’s for many especially in the east and north.

Northerly winds strong at times through Cook Strait from afternoon, winds may gust to gale at times.

Cloudy for the West Coast of the South Island with showers, rain moves into South Westland during the afternoon with heavy falls then pushing northwards later in the evening / overnight. Expect strong northeasterlies about coastal Fiordland.

For the east coast we see plenty of thick high cloud, winds gusty from the north or northwest inland. A few scattered areas of rain pass over Southland, Otago and perhaps parts of South Canterbury during the afternoon / early evening then clearing. Temperatures reaching into the mid 20’s out east. 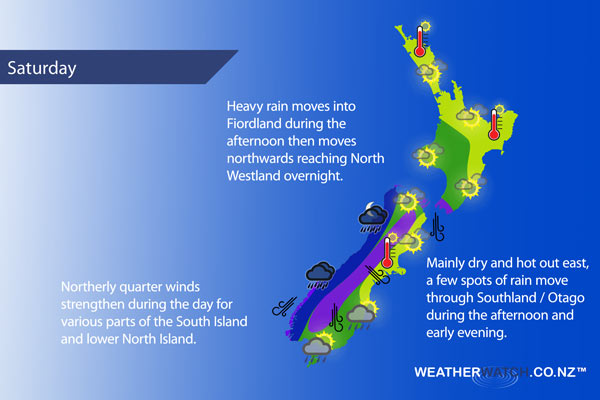