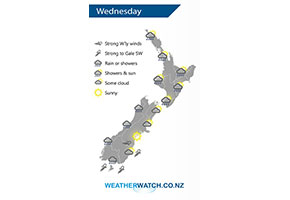 This front tracks over the North Island on Wednesday with a strong westerly quarter airflow developing in its wake.

Areas of rain or showers for the whole western side of New Zealand on Wednesday, only a few spots of rain possible in the morning for the eastern North Island then expect a mainly sunny afternoon.

Mainly dry for the South Islands East Coast however a front developing in the morning brings some rain to Southland, then pushing into Otago in the afternoon however easing to only a few showers at that point. Winds will be quite strong from the west or southwest about the lower South Island during the day.