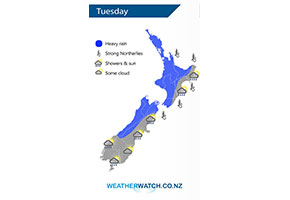 A front passes over the North Island on Tuesday moving in a west to east fashion clearing off to the east by late afternoon. A west to southwesterly airflow lies over the South Island.

Morning rain for the western North Island may be heavy on Tuesday then easing to showers and sunny spells from afternoon, dry at first in the east then some rain passes over from the west in the afternoon, clearing evening.

Early heavy rain for the South Island’s West Coast, Nelson and Marlborough then easing. Cloudy areas for elsewhere in the South Island with the odd shower about especially for Southland and Fiordland, just the risk of a shower for Canterbury. 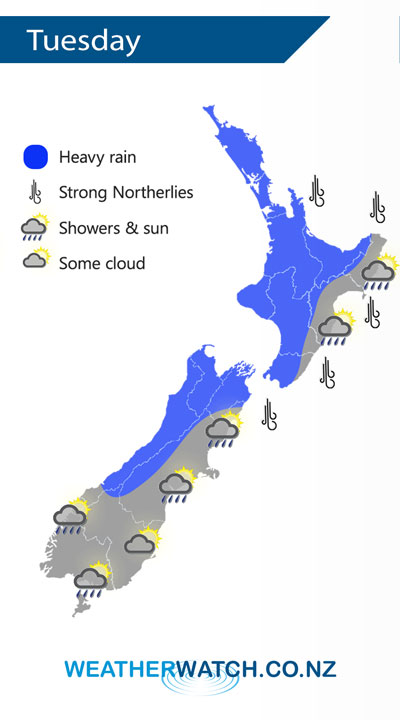 so there will be heavy rain you said that yesterday in an area marked in blue and there was none unless you call 12.5 mils heavy rain

Which map are you reffering too? Our Infographics don’t come out on Sunday.

Auckland had 13mm between 11am and midday yesterday which is a reasonable period of rain in a fairly short time. Heavy rain is defined as being more then around 8mm per hour so that works out to be about right.