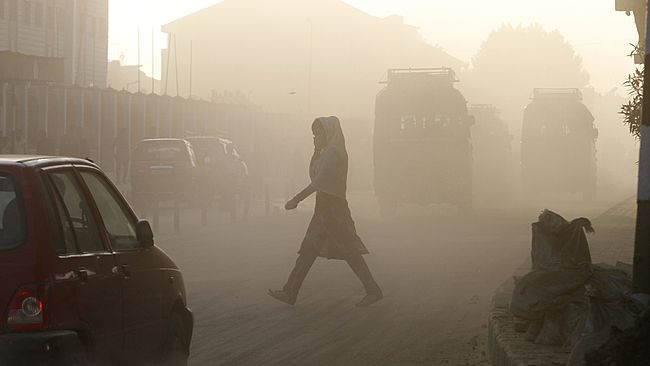 Weather, geography, population growth and energy consumption all play roles in the ongoing air pollution problem in New Delhi, according to a newly released study.

The combination elevates the concentrations of air pollutants, including ultra-fine particles which are the most harmful to human health, and contributes to thousands of deaths per year, said Dr. Prashant Kumar of the University of Surrey. His team’s study was published in the Journal Atmospheric Environment.

New Delhi has the worst air pollution of any city in the world, according to the World Health Organization. Worldwide, air quality is poorest in the Eastern Mediterranean and Southeast Asian regions, followed by the Latin American and African countries, the WHO said.

“Given the complexity of sources and the influence of meteorology and influx from peripheral areas, Delhi’s pollution cannot be managed independently only on a city-wide scale but requires an integrated approach including the adjacent peripheral regions,” Kumar said.
The geography may play one of the biggest factors in the pollution problem, Kumar said.

“The geography of Delhi results in the advection of air, or large-scale movement in the atmosphere, into the city from the surrounding areas, which can sometimes be significantly more polluted than the city centre itself,” he said. “As a land-locked megacity, there are limited avenues for the flushing of polluted air out of the city, or its replacement with air from relatively unpolluted marine regions, which means that atmospheric transport from all directions, is likely to add to inner-city pollution.”

Under strong areas of high pressure, air masses can become stagnant with no flow thus trapping pollution in valleys or under inversions, AccuWeather Senior Meteorologist Jason Nicholls said.
An inversion occurs when temperatures rise with height from the surface to a few thousand feet, Nicholls said. Temperatures normally cool with height.

“Given the big valley across northern India, it is commonplace during the winter months for New Delhi and areas within the valley to become trapped under an inversion for several weeks at a time,” Nicholls said. “This results in a prolonged period of foggy and smoggy weather in these areas. Aside from brief breaks, it is not uncommon for this foggy/smoggy pattern to persist for a month or more during the winter and early spring.”

While the air pollution problem is complicated and aggravated by some factors out of human control, there are some ways to deal with the issue.
“Simple remedies such as ‘greening’ unpaved roadside areas through a natural or artificial grass canopy could possibly help in limiting coarse dust particles during dry and windy seasons,” Kumar said. “Natural measures, such as the development of wetlands and trees, are also effective.”

“There is also a cultural context here,” he said. “Even the best science and technology will not succeed in reducing emissions and improving air quality if it is not considered in a broader framework of economic development of the country, rising awareness of public health risks and a change in attitudes and regulation towards poor quality fuels. It is a complicated, pick-and-mix of problems that will prove difficult to combat without innovative, encompassing and quick action.”