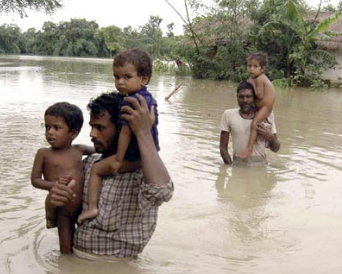 Heavy rains and floods in India have affected more than 1.6 million people in the tea-growing north-eastern state of Assam, with officials scrambling to shift hundreds of thousands of people into 300 makeshift relief camps.

The death toll in Assam rose to at least 12 on Wednesday, according to police and rescue workers. Heavy monsoon rains are forecast for at least another 48 hours.

Hundreds of thousands of villagers have abandoned their homes and livestock. Some used homemade rafts made from banana trees to flee; others were rescued by soldiers from the rooftops of their waterlogged homes.

In neighbouring Nepal, flash floods and landslides have swept through villages, killing at least 58 people over two days.

Rescuers and soldiers arrive to help flood victims at Majuli in Assam. Photograph: Anupam Nath/AP
The Brahmaputra river and its tributaries have burst their banks, flooding roads, highways and villages in more than half of the region’s 32 districts. Mobile phone signal is down in many parts of the state, and power transmission towers have been toppled.

“The situation has turned from bad to worse since Tuesday, and over a million people have been shifted to relief camps,” Assam’s water resources minister, Keshab Mahanta, told Reuters.

The Kaziranga national park in Assam â€“ home to two-thirds of the world’s one-horned rhino population â€“ is 80% under water, and wild animals are seeking shelter on roads. At least one rhino was killed in the rains, according to forest officials.

Despite the scale of the disaster, the Assam floods have received relatively little attention in national newspapers or on TV channels.

Floods in the state have become an annual event, particularly during the June-September rains. The worst occurred four years ago, killing 124 people and displacing 6 million. Hundreds of people are killed, and thousands of acres of fertile land lost, to floods every year.

The government in Assam has said that flood relief and rescue measures are a priority, and that disaster-response forces are doing everything they can to help. A minister from prime minister Narendra Modi’s cabinet promised their support in the state’s relief efforts.

With extreme weather becoming increasingly common, the government is under pressure to find long-term solutions to India’s water woes.

Earlier this year, a drought hit many parts of India, affecting more than 300 million people. Last year, floods in the southern state of Chennai killed more than 280 people.