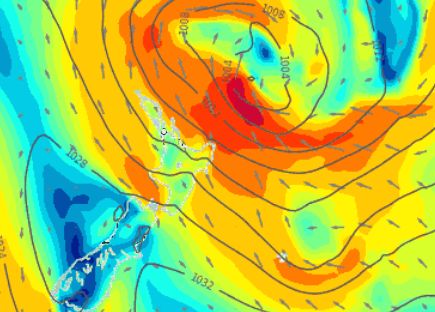 The fifth weekend low pressure system to affect the North Island this month is expected to develop on Friday, then hover around north eastern New Zealand well into the first week of September predicts WeatherWatch.co.nz.

Head weather analyst Philip Duncan says like the previous four weekends this one will be again be a mixture of warm sunny weather and cloudy, wet, weather. “This new low will form after a cooler southerly change arrives on Thursday. This low may not deliver a lot of rain for the northern most regions, instead it may be more focused on Gisborne, East Cape and Hawkes Bay”.

Mr Duncan says the low will deepen over the weekend again fuelling blustery south easterlies for some areas “South easterlies can be a fairly dry wind direction for many of the North Island’s main centres but gusty winds could affect eastern coastal areas of the entire island at times from Friday through until mid next week”.

“Other areas will be sunny, calm and mild – further evidence of our ‘chaotic’ weather pattern this year”.

Rain may possibly linger off and on for several days around Gisborne and East Cape and parts of Hawkes Bay.  These same rain bands will be just offshore for Bay of Plenty, Coromandel and Northland but should the low drift a little closer to land then the rain might affect parts of those regions too.

Meanwhile the South Island will again be in an almost completely different weather set up with high pressure covering the south for most of the weekend. The low in the north might bring in brisk south easterlies and some cloud or drizzle to eastern Marlborough and north eastern Canterbury for a time too – but for the most part the South Island should remain fairly separate from the North Island’s weather yet again this weekend.