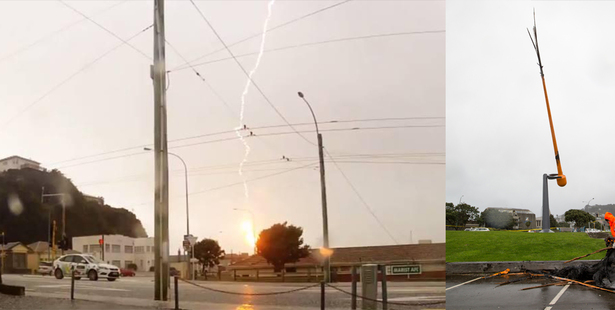 Wellington’s Zephyrometer sculpture has been dismantled before being sent to Christchurch for repairs after it was hit by lightning in August.

The sculpture near Wellington Airport was damaged when it was hit by lightning during a storm on August 4.

The remains of the Zephyrometer were dismantled by a crane this morning and loaded on to a truck, Wellington City Council spokesman Richard MacLean said.

“The truck will wait until after this evening’s rush hour and will then head to the ferry where, hopefully, it’ll start its journey to Christchurch and repair at the workshop of the artist Phil Price,” he said.

The kinetic sculpture, which was made by Price, was installed in 2003 and was designed to mark out the strength and direction of the wind.

Last month a Herald photographer, who was near the scene when lightning struck the sculpture, said the lightning appeared to have struck the top of the needle and blown out through the middle.

“There were bits and pieces spread 100m or more across the carpark,” he said.