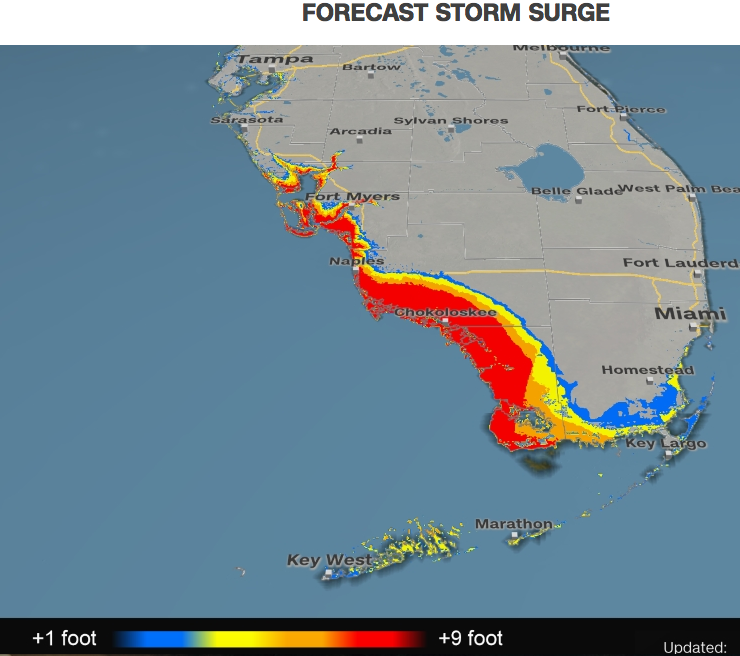 10:15am NZT — Hurricane Irma is now a Category 2 storm, threatening to bring dangerous storm surges along Florida’s west coast of over 4.5 metres, the National Hurricane Center in the US says.

As of this hour the storm was about 8 kilometres north of Naples, Florida, (A city of 22,000) packing maximum sustained winds of 180 km/h with gusts over 200km/h and areas of tornadoes too.

Hurricane Irma slammed into southwest Florida mid this morning, with sustained winds of 200km/h as it made its second landfall in the state. Initial landfall was in the early hours of this morning in Key West as a Category 4 storm.

By mid morning today it had weakened very slightly, dropping it a dangerous Category 3 storm when it made the second landfall at Marco Island.
That city and nearby Naples, Florida, will endure some of the strongest winds in the next few hours, the National Hurricane Center said.
The interaction with land is why the storm has weakened a little further to a Category 2 storm.
Irma will track towards Tampa today – a city of 400,000 people. Millions are in the path of the storm today and tomorrow.
The storm surge – which is a dome of water above the usual tide with waves on top of that and then fanned by winds of 180km/h blowing it further inland – will continue to be catastrophic and inundate entire suburbs, towns and coastal cities for the next 24 hours in some areas.
Irma is uprooting trees and turning streets into rivers, including in Miamia on the south eastern side of the State.
And there’s plenty more to come today, tomorrow and the day after.
– Track Irma using CNN’s Storm Tracker here
– We’ll have more in our weather video with Philip Duncan out before noon today
– Watch CNN at CNN.com for additional updates
– WeatherWatch.co.nz with CNN