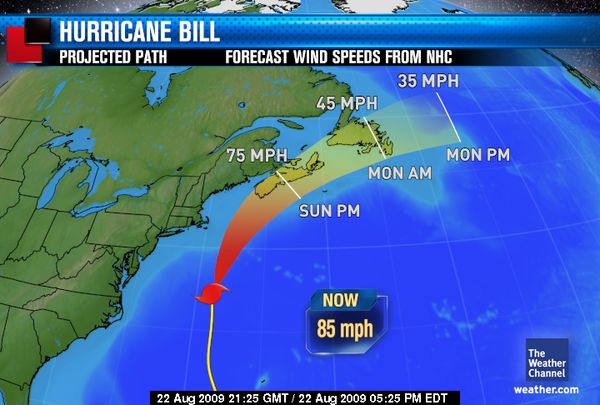 Hurricane Bill is accelerating north, well off the Eastern U.S. coast, and is still expected to turn northeast overnight. Bill made its closest pass to Bermuda overnightearly and will pass by Cape Cod tonight NZT – then race toward Nova Scotia, Canada, by early Monday morning.

Battering waves and dangerous rip currents have already been impacting parts of the Eastern Coast including the Outer Banks, and high waves will spread into New England tonight into Sunday, topping 6 metres – 3 times the height of an average door – along Cape Cod and the Islands.

Some beach erosion and minor costal flooding are possible, particularly along the Outer Banks of North Carolina, Long Island, and Down East Maine.

Maximum winds are down to 140km/h making it a category 1 hurricane, but the strongest winds are nearer the center. Tropical storm force winds however, extend outward up to 440kms from the center, making Bill a large hurricane.

Overnight, Bill will be making its closest pass to the southeast Massachusetts coast, include Cape Cod, Nantucket, and Martha’s Vineyard and some of the tropical storm force winds could reach these areas. A Tropical Storm Warning has been posted for these areas.

Hurricane Bill will rapidly skirt past or along the coast of Nova Scotia later Sunday, and then move northeast through Newfoundland out into the North Atlantic.

Elsewhere in the Atlantic, a tropical wave was located about midway between the Leeward Islands and Cape Verde Islands. It was producing some disorganized showers and thunderstorms while moving west, but was showing no signs of organization at this time.

Bermuda appeared to be breathing a collective sigh of relief today as Hurricane Bill passed by the Island leaving it almost unscathed.

Police said there were no major incidents, while King Edward VII Memorial Hospital did not treated anyone with storm-related injuries either in Paget or the new medical center at Southside.

The Causeway, which had been closed at 8.30 p.m. yesterday, reopened at 9.30 a.m. today, and buses this morning resumed their operating schedules.

The airport reopened at 2 p.m. but Aaron Adderley, L.F. Wade International Airport general manager, said all flights today had been cancelled except for the British Airways London-Gatwick route and the incoming American Airlines flights from JFK and Miami.

“The BA flight is taking a three hour delay because of the hurricane. They wanted to keep a check on the crosswind situation and thought the delay would make things more feasible for them.

“I believe it could be close to midnight before the flight to Gatwick departs.”

JetBlue said it would fly extra flights tomorrow for customers booked today and unable to travel.

Belco said this morning that 1,300 customers were without power – initially the number had been 3,700 who lost power at some point during the storm. It is expected that most people will have power by tonight.

“It’s been on and off all night. The crews had to stop working in the night because the winds got too high and there was lightning,” said a spokeswoman.

She said the company had received no reports of downed power lines but that any outages were due to debris and wind. “A lot of them are due to debris falling onto wires or winds blowing out switches.”