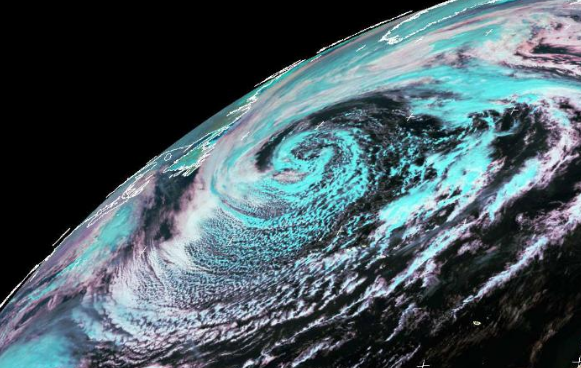 A huge ocean storm spinning in the north Atlantic Ocean this week is making for stunning satellite imagery.

The images are of an intense low-pressure system that saw its minimum central pressure drop to 958 millibars Monday. Hurricane-force winds were detected by satellite at that time over the open north Atlantic waters, according to NOAA’s Ocean Prediction Center. Wave heights maxed out at 14 metres near the low-pressure center.

This particular storm will weaken the next couple of days, but another low of similar intensity could develop in the same general area by late this week. Both storms are likely to produce high surf along coastal Ireland and Portugal.

First is a closeup view of the low-pressure center Tuesday morning from NOAA’s new GOES-16 satellite.

GOES-16 satellite animation from Tuesday morning. This data is still non-operational. On the upper left side of the image is Newfoundland which saw wind gusts over 50 mph. (NOAA/SSEC/University of Wisconsin)

Water vapor imagery from GOES-16 also showed the spinning center of the low nicely on Monday.

For perspective on how large the storm is, here is another visible image from NASA’s Modis Aqua satellite on Monday. Visible satellite imagery shows how the storm would generally look like with the naked eye from space.

Here is some more imagery showing the powerful storm.

Another view of the storm Tuesday morning in relation to Europe on the right. (Dundee Satellite Receiving Station)