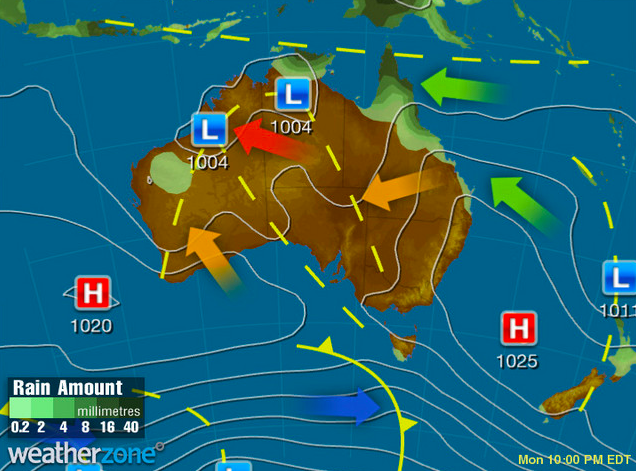 It’s going to be a sweaty summer break for a large swathe of southern and southeastern Australia as a pool of hot air circulates around the country.

On Thursday, temperatures soared into the mid-to-high forties across parts of Australia’s eastern inland, setting a new December record at Thargomindah (47.2C).

This heat is now being driven up towards northern Australia by a large high pressure system that’s passing to the south of WA.

As this high pressure system moves through the Bight, the pool of heat will be driven towards WA during the next couple of days. Here, it will linger and intensify further during the first half of next week.

When a large mass of hot air builds up over northern WA, it’s generally bad news for southern and eastern parts of the country. This heat has to go somewhere and it usually spreads east.

By Christmas eve, the high pressure system that’s crossed southern Australia is likely to be moving out into the Tasman Sea. This will allow WA’s intense heat to start spreading across the country.

South Australia will be first in line and should experience a burst of extreme heat in the days following Christmas. Adelaide is forecast to reach 34 degrees on Christmas Eve, 35 on Christmas Day and may hit 37-40 degrees each day between Wednesday and Friday next week.

Image: A hot air mass is likely to be sweeping across southern Australia by Thursday, December 27th.

While temperatures will gradually climb in southeastern Australia from the start of next week, the region will experience a pulse of more intense heat between Christmas and New Year.

Weak cool changes will interrupt the spell of heat in Tasmania and southern Victoria next week. Hobart is expected to stay under 30 degrees between now and at least next Friday, while Melbourne should only have a couple of days in the mid-to-high thirties, probably on Thursday and Friday. However, the heat will be more persistent and intense further north.

Some models suggest that a tongue of very hot air will stall over northern Victoria, NSW and the ACT during the second half of next week and could even linger into the first few days of January.

If this pattern comes to fruition, a broad area of southeastern Australia could experience an intense heat wave and an extended period of elevated fire danger ratings.

There is still room for change in the forecast, particularly towards the second half of next week and during early January. However, it’s a good idea to take extreme heat into consideration if you’re planning a holiday in southern or southeastern Australia between Christmas and early January.