Historic swim from Cuba to Florida abandoned after 29 hours 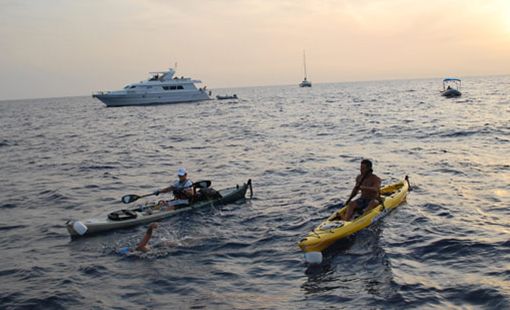 !BREAKING NEWS 5:20pm — CNN reports 61yo Diana Nyad has abandoned her effort to swim from Cuba to Florida after 29 hours in the water.

It’s the wind against the water. As our boat, the Gulf Steam surges East, the windows are blowing against the current, whipping the water into choppy 2-3 foot seas. The flat calm of Cuba is gone, conditions turned from perfect to passable.

Amidst it all, Diana Nyad keeps swimming at a consistent 52 strokes-per-minute. When the pace slips higher or lower, handlers counting each hand-slap know it’s time to call her in for hydration or food.

At Diana’s request, handlers have just changed the schedule to nourish her more often—fluids every 30 minutes and food every hour
Surrounding the lone 61-year-old swimmer, an armada of sea craft act in support. Teams of handlers and boat drivers on the 75-foot yacht Bellisimo take turns resting, then move to Voyager, the customized vessel that accompanies Diana.
On either side of Diana, towing powerful Shark Shields to deter predators, two sea kayakers match her every move. In all, more than 45 people are accompanying Diana in her record-setting attempt to swim without a shark cage from Cuba to Florida.

Every two hours, a small dingy makes the rounds from boat to boat, delivering new crew members to the boat where they belong. The winds make tendering treacherous, with sea conditions hazardous. And, if it’s rocky for a 75-foot boat—imagine the toll on a 61-year-old swimmer after almost 24 hours in the water.

Despite the challenges—the aching shoulder, the nagging asthma, the rocky conditions for the support team—Diana is a bulldog, tenaciously if slowly making progress.