Home > News > Heavy rain into the heart of Auckland... 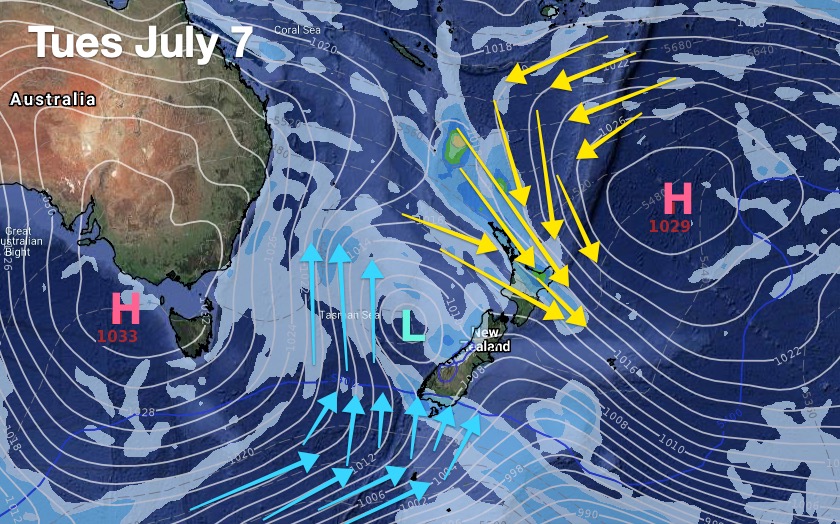 Saturating downpours slid down Northland and Auckland overnight with dawn revealing sunny skies for half of Auckland while heavy rain moves southwards over the Hunua Ranges and water catchment dams – it is a fantastic set up and is the first true wet event this year for many.

As WeatherWatch.co.nz forecast last week the rain this week is a drought breaker for many places still waiting for rain after months of mostly dry.

Across Thursday this rain will slide further around Bay of Plenty, East Cape and Gisborne with heavy falls and maybe an isolated thunderstorm or two, which tends to add heavier falls into the mix.

The sub-tropical element responsible for making the rain heavier will linger in some regions for days, with more downpours coming to northern and eastern parts of New Zealand.

By Monday a colder southerly change is arriving – but with a twist for northern New Zealand, as it may spark a small local area of low pressure which once again will drive in rain and showers.

Across 2020 IBM data and even GFS data from the US Government has been fairly consistent at forecasting weak northern lows that have failed to truly bring rain. The difference with this set up is that the ‘blocking’ high pressure system to the south has pushed further away from northern NZ than previous similar events – allowing the rain to sink south over land and not remain painfully close out at sea.

There is some resistance though – the high pressure in the south is pushing back and that made for a very windy night in eastern Waikato with big gales over 100km/h roaring down the western side of Mt Te Aroha and into the Te Aroha township. A normal set up with a windy easterly but this strong wind isn’t caused by a storm – it’s simply the squash zone of air pressure between a weak but large low in the Tasman and a strong high further south. These easterly quarter winds will move southwards over the coming 24 hours with gusts over 100km/h in some places (Nelson ranges for example).

LONG RANGE INTO JULY:
Another burst of rain from the west as NZ looks set to be stuck between two highs in week one. Once this has passed by there should an increase in sou’west winds and showers with high pressure growing in the Tasman Sea.

Generally speaking – this has been the most positive week of 2020 for a number of rural parts of NZ with rain and mild temperatures combining. Northern farmers will enjoy mid-winter pasture growth in the northern half of the North Island too.

that thunderstorm early morning woke me up in south auckland.