Heavy frosts tonight again in the south, some in the north – but what a bounce back by Monday (+9 Maps/Graphs) 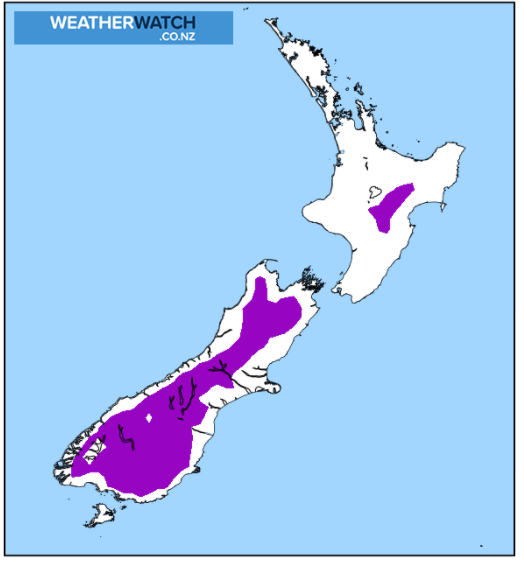 Another cold, frosty, night is on the way with NZ’s Frost Forecaster at RuralWeather.co.nz expecting many inland parts of the South Island dropping back in to the risk zone again.

However many coastal areas may just be shy of it, or at least frosts will be lighter.

The lowest temperatures inland will again be around -4 to to -8 with perhaps a couple of spots going a little lower in the South Island’s interior and highlands.

The lower inland part of the North Island and Central Plateau also has a cold night ahead with frosts in some places although cloud cover will become more likely in the east and north.

The upper North Island continues to stay fairly mild with Auckland City having double digit overnight lows, but rural areas will be colder.

By Monday night and into Tuesday a sub-tropical flow, or milder northerly quarter winds, will move in making for warmer than average overnight lows, meaning the South Island goes from several degrees below normal to several degrees above normal in just 48 hours.

New Zealand’s only public Frost Forecaster can be freely found at www.RuralWeather.co.nz

Finally, you can also see the below zero temperature maps by clicking here: It’s worth noting frosts can occur in the areas surrounding the risk zone too.